"What Kind of Nigger Are You?" So Said An SEIU Rep to Kenneth Gladney During the Great Tea Party/SEIU Beating Brouhaha of 2009 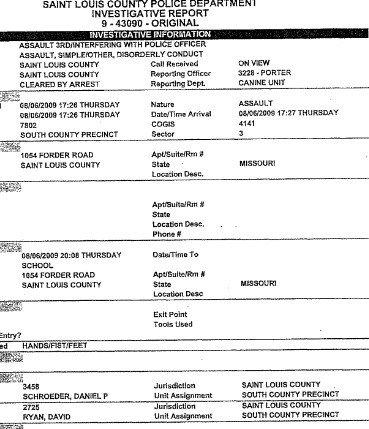 The website biggovernment.com appears to have obtained a copy of an investigative police report concerning the alleged beating of button-seller Kenneth Gladney and the arrest of St. Louis Post-Dispatch reporter Jake Wagman.

A little background: Gladney was with tea-partyers circulating political swag outside a health-care town hall in August when numerous scuffles ensued. Gladney said he was beaten by two members of the SEIU. Following the brouhaha, Gladney became a minor celebrity on the tea-party circuit.

Wagman, the P-D reporter, was on assignment covering the ruckus when he was arrested for interfering with law enforcement.

Back to the report, which flacks at the St. Louis County Police Department believe is authentic: It draws from interviews with a trio of witnesses and a conversation with Gladney himself.

According to the report, the witnesses told a police officer they saw SEIU reps Elston McCowan and Perry Molens begin to assault Gladney when he was handing out pens and other paraphernalia.

I observed no facial injury, although Victim Gladney was holding his left elbow complaining that it was hurting.


McCowan is black. Molens is white. Both men were arrested. A third, unknown suspect has not been found, according to the report. No one has been charged.

Meanwhile, as supplemental pages to the report detail, four others, including Wagman, were hauled off by county police that night. According to the document, police had to mace one woman who kept resisting arrest.

In the case of Wagman, the Post employee, the police report makes zero mention of the fact that Wagman is a reporter who was covering the action...in a public place.