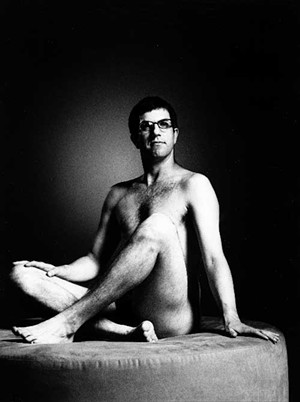 A.J. Jacobs, the quirky Jew who lived biblically for a year (and lived to tell) and read the entire encyclopedia (see above parentheses), visits the St. Louis Jewish Book Festival Tuesday to pimp his new project, The Guinea Pig Diaries, My Life as an Experiment.

Dude is a writer for Esquire who not only gets to turn a lot of his magazine work into book fodder, but gets paid to do things like outsource his life to a pair of Indian assistants.

No, really. It's in there, along with essays about the trials and tribulations of practicing something called Radical Honesty and what it's like to get nude for a photo shoot.

Unreal quite enjoyed the book, not only for Jacobs' smart sense of humor but for his breezy, hey-if-you've-got-five-minutes-in-the-pooper-ponder-this-for-a-second-willya sorta tone.

Btw, bathroom reading is something Jacobs can appreciate. Keep going.

Unreal: Are you wearing pajamas?
A.J. Jacobs: [Laughs]. No, I'm going formal. I'm in a T-shirt and jeans.

In this awesome recession we have going on right now, I feel like you're going to make a lot of people jealous with this book. I mean, you are basically making a living sending lots of e-mails, posting ads on Internet dating sites and, um, outsourcing your job.
{Laughs]. Well, I have to say I feel quite lucky to be able to make a living this way. I am blessed as they say in The Bible.

I'm sure it was flattering when Mary Louise Parker said you should pose naked in Esquire. Were you disturbed when your wife agreed?
Oh! More than a little! I was completely disturbed. It was horrible.

Is the portrait hanging in your living room?
Actually Esquire made up a little mock cover and put my nakedness on it. So we do have that, but not in the living room. We don't want to scare our guests.

Well, I'm going to be, what do you call it, radically honest. I liked it a lot better than the ones I found of you on Google images.
[Laughing]. Well thank you that's very flattering.

Speaking of being radically honest, who footed the $1400 a month bill to outsource your life?
That was Esquire.

OMG. As a fellow journalist, I'm outraged - I mean that's like AIG, fuck-you money.
[Laughing]. I don't think journalism comes close to AIG money. I think our annual budget is like the croutons budget for their cafeteria.

OK you and I both know this question is gay, but readers will want to know what your favorite experiment was.
[Laughing]. I loved the George Washington experiment because it was fascinating to read about his 110 rules of life, which were all about great values like respect and self-discipline and also not adjusting your private parts in public. That is literally rule number-two in his 110 rules of life. It's literally, don't adjust your crotch in a public place. That's solid advice. It has served me well.

I'm glad you brought this up, because in a radically honest sort of way, dressing up like George Washington sounded like what Brad Blanton [the founder of Radical Honesty] would call a dipshit idea.
[Laughs]. I didn't know much about him, so it was a crash course in George Washington, and I learned that this one biographer went through his receipts and found a prescription for Spanish fly which he claims George Washington used as a primitive form of Viagra. This is the kind of stuff I did not know. I say in the book that if it's true, then the Washington Monument is the most ironic monument in the world.

What experiments didn't make it into the book?
I do get suggestions from people, which I like, and a few people recommended that I do all the positions in the Kama Sutra, which Julie, my wife, said, No, thank you. I will say, I'm OK with that, because I thought it would require flexibility. Another one I wanted to do but again Julie nixed: I'm interested in how technology affects human interactions and so I wanted to take it to the extreme and and have no face-to-face contact for a month and do everything through email, text messaging, and so on, but Julie said, No, we have our niece's bat mitzvah and you're not going to Skype your way to the table. So that one never took off.

Too bad. That sounds good.
You're welcome to do it. I'm definitely not doing it.

Wow, you really are whipped. (See, "Whipped.") Speaking of that chapter, I wish we could have  learned more about sitting and peeing, German-style.
Ha! Well, I'm glad you asked. I've had lots of men actually talk to me about that. I think the practice is more widespread than is actually acknowledged.

Really. So be radically honest, though: Why didn't you elaborate on this important topic? [Laughing]. I'm not sure. If I had known the interest was so keen I guess I would've. I've had some people say they like to sit while peeing. And yeah, I mean, you get to read a very short article; it's much shorter than your average, but you still get something done. Although, now that I think about that, it conflicts with my experiment on not multi-tasking.

You really do sound like a guy who read the entire encyclopedia.
In what way?

Your voice.
I do have an interesting voice. For my new book I'm trying to be the healthiest man alive. As part of that, I'm going to try to change the way I breathe and the way I talk. So maybe the next time you talk to me I'll sound like James Earl Jones.

But for now people can hear you tomorrow in St. Louis?
Yes. The Jewish Book Festival. 1 pm. At the St. Louis JCC.

Have a good trip.
Thanks. I had a fun time talking to you. Radically honest.