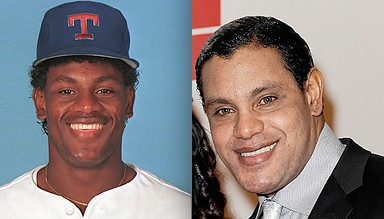 Sammy Sosa wants everyone out there to know that, no matter what you may have heard, and despite seemingly incontrovertible photographic evidence to the contrary, he has not become a gay vampire.
No, Sosa is merely going through a skin rejuvenation process, and the lighting in the now-infamous photo was the real problem. Sure, he was a little pale compared to his usual skin tone, but more than anything, there were just problems with the light.
He isn't Michael Jackson. He isn't some sort of self-hating racial climber trying to turn himself into someone a little less brown. And he certainly isn't the homosexual undead. I just cannot stress this enough.
See, I knew there was a simple, rational explanation for all this. Sammy is just the victim of bad lighting. As someone who has himself been victimized many times in life by unflattering light, I can't tell you how easy it is for something like this to happen. I remember my senior year of high school, the photographer got the lights wrong, just a shade too bright, and my pictures that year are of a tall, gaunt Ethiopian man. And don't even get me started on fluorescent light. Every single time I get near a fluorescent, it turns me into a giant spider. Very disheartening.
So sure, it may look as if Sosa has become Nosferatu, but that's just your imagination. Oh, and the lighting. And sure, it may look as he's become the sort of vampire who might be classified as, oh, a wee bit lavender, if you know what I mean, but that's also completely unfounded.
Then again, if it wasn't the lighting, and Sammy has, in fact, begun to thirst for the blood of living interior designers, there isn't anything wrong with that. So maybe he was bitten by a gay vampire somewhere along the line. Hey, no big deal. Who hasn't? Why, I remember one time, while on a family vacation in the Carpathians, I met the nicest man in a little cape shop and for the rest of that trip-
You know what? I don't think I'm going to tell you the rest of that story. What happened between Bruce the Impaler and I that summer is private. Ever since then, though, I've had an unnatural attraction to blood banks and Pet Shop Boys records.
Either way, I believe Sosa. He says he isn't whitening his skin, then he isn't whitening his skin. Just an acid peel and some bad lighting is all that's going on here. And hey, just because he's begun ending all his public appearances by turning into a bat, that doesn't mean anything. Hell, he may be turning into a bat, but look at the bright side: at least this time we know the bat is getting corked.
Cue rim shot.

Baseball Shit That Gets Passed Around