November 06, 2009 at 12:59 PM
comment
Today's Post-Dispatch lays out in detail what apparently has been kicked around now for the past few months.

The failed downtown shopping mall, St. Louis Centre, is going to be converted into a parking garage. Well, mostly anyway. 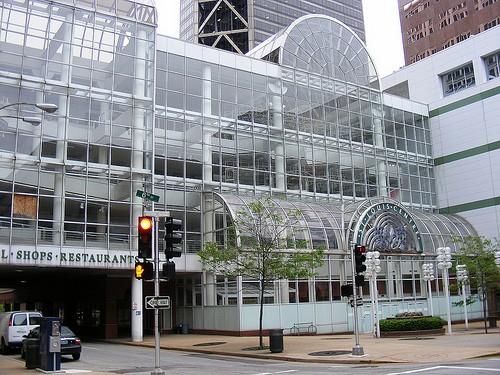 Developers plan to turn the top three stories of the mall into parking that will be set aside for two nearby law offices. The re-configured mall -- which first opened in 1985 -- should have space on its top floors for 750 automobiles.

The first floor of the structure will feature retail space that opens up to the street instead of the inside of the mall.

Putting parking on St. Louis Centre's upper floors will be done with ramps through much of the existing atrium and bridges over the rest. Law firm Thompson Coburn, which is in the neighboring US Bank tower, will get much of the parking in a deal reached last year in which the firm agreed to stay downtown.

Geisman said St. Louis Centre's redevelopment plan carries no guarantee of success but is worth the gamble to eliminate downtown's "black hole." The reworked mall will have the benefit of a growing downtown residential population -- estimated at 12,000 -- that didn't exist when St. Louis Centre opened.