November 05, 2009 at 1:18 PM
comment
Tonight is an exciting night if you're a St. Louis Blues fan. The team's top prospect, Lars Eller, will make his NHL debut at the Scottrade Center against the Calgary Flames. Eller will also become only the sixth player in NHL history of Danish descent.
Personally, I'm hoping Eller can come in and offer some sort of offensive spark to a Blues squad that has looked surprisingly punchless lately, particularly on the power play.

​
How long Eller will be here in St. Louis is tough to say, as he got the call essentially to fill in for Andy McDonald, who is currently trying to shake off the effects of a hard trip into the boards this past Saturday. Even if it's only a short stay, though, seeing another of the Blues' prized prospects make his way to the NHL level is very gratifying. 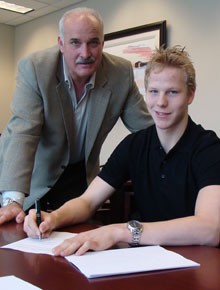 Just in the past three seasons, the Blues have graduated T.J. Oshie, Patrik Berglund, David Perron, Erik Johnson, and Alex Pietrangelo to the National Hockey League. No other team in hockey has built such an impressive talent base almost entirely from within, and with so many at such a young age. Add in David Backes, who debuted during the 2006-2007 campaign, and Ben Bishop, the young goalie who is still very much a work in progress and has time to develop, and the Blues have virtually a full team of talent all developed in-house just since the time Dave Checketts and John Davidson took over the team.
Which, of course, makes it all the more difficult to understand why the Blues have struggled so badly this year. Offensively, the Blues just don't seem to be able to consistently get anything going early this season, and it's been most noticeable on the power play. Adding to the frustration is the fact the power play was such a bugaboo for the Blues last season at times, yet they don't seem to have figured out any solutions to the issue. And looking at the numbers on offense for the Blues, it isn't just one or two players dragging the team down; the numbers are rough across the board. Keith Tkachuk has been the Blues' best producer on offense so far this year, with nine points in twelve games. Still, I'm not all that concerned long-term; there's a ton of talent there. It's just a matter of getting things to gel.
But for the moment, I'll be hoping Eller can come in and offer the same sort of shot in the arm we've seen from players like Oshie and David Perron in the past. At the very least, Eller should bring some youthful energy and a fresh set of legs to the ice. He moves the puck well and can make plays, though he isn't a particularly prolific goal-scorer. (Which does worry me a bit; the Blues have tons of nimble playmakers who function very well as pass-first players, but not a whole lot of true goal-scorers.) Eller is only 20, so he's young even by hockey rookie standards, but he's played extremely well for Peoria this season, with 11 points in as many games.
Regardless of how well he does in his debut, it's still exciting to see another talented youngster make his debut for the Blues. Of course, a one goal, two assist effort in a thrashing of Calgary would certainly be welcome. But no pressure, kid.