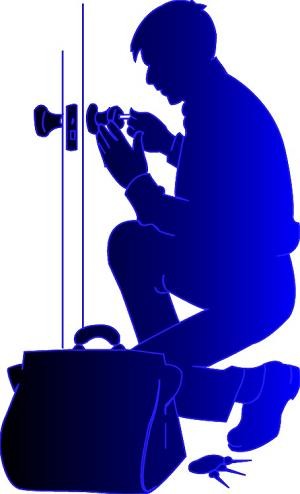 Here's a curious tale coming out of the U.S. Attorney's office in St. Louis.

Last week federal investigators charged Eliyahu Barhanun of Creve Coeur and two other men from Florida on federal charges involving a scam of overcharging customers for locksmith services. According to an affidavit (viewable at the end of this post), the men operated and/or worked with Dependable Lock, a company registered in New York but headquartered in Clearwater, Florida.

Dependable Lock managed a national network of locksmiths that it dispatched from a call center in Clearwater. The company would allegedly quote customers a price for service but then charge three times that much -- or more -- when the locksmith completed the work.

Many of the locksmiths employed by Dependable were illegal immigrants from Isreal. Financial records show that some proceeds from the locksmiths were then funneled to a real-estate company in that country.

Consumer complaints filed by customers in the State of Missouri indicate a persistent pattern of fraudulent price quotation and overcharging by Dependable Locks locksmith technicians. In 37 of 64 consumer complaints relating to Dependable Locks filed with the Missouri Attorney General's Office, the customer reported that he/she was quoted a certain price on the phone, and then was charged a significantly higher price by the responding locksmith technician at the scene.

The telephone dispatchers were instructed to misrepresent or understate the possibility of additional charges above the price quoted.  The market rate for a standard car lockout is typically about $60.  The locksmiths were instructed to charge significantly more than the price quoted, and significantly more than usual market rates.  Technicians use techniques such as accusing the consumer who objects to the overcharge of "theft of services," threatening to call the police, withholding the customer's keys or driver's license, or following the customer to an ATM machine to ensure payment.

The locksmith technicians allegedly are allowed to split the profits of the fraudulently procured locksmith services with the company, typically 50/50 or 60/40, and that the technicians are required to remit the company's share of the proceeds by regularly purchasing and shipping money orders to the Dependable Locks location in Clearwater.

The affidavit states that Eliyahu Barhanun, David Peer and Moshe Aharoni conspired with the managers of Dependable Locks to implement a scheme to procure overcharges for locksmith services.

David Peer, 31; and Moshe Aharoni, 28, both of the Clearwater, Florida area, are each charged with conspiracy to recruit and employ aliens who are not authorized to work in the United States, mail and wire fraud and engaging in financial transactions to promote unlawful activity.

Each of the above violations carry a maximum penalty of five years in prison and/or fines up to $250,000.

US Postal Inspectors have established a hotline for those believing they are victims of this scheme.  The phone will not be manned, however callers will be asked to leave contact information which will trigger an investigative response.  The phone number for victims is 314-539-9441.

Affidavit on next page...


Affidavit for Complaint of Eli Barhanun