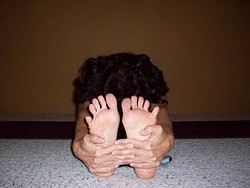 Today the St. Louis Post-Dispatch has an interesting story about the Missouri Department of Revenue's determination that yoga studios are fitness centers and therefore subject to the state's 4 percent sales tax on the latter.
The yoga lobby -- OK, that's a stretch, but Unreal couldn't resist -- counters that yoga classes aren't the same as, say, spinning classes because the physical activity is actually a means to a spiritual end.
If the yoga studios can sway the state on this First Amendment-based argument, they'll get an exemption on religious grounds.
Before you guffaw, consider that the state of Washington, after pulling a similar maneuver, considered the yoga studios' argument and then backed down.
Now, Unreal's never been one to favor anything that denies folks their spiritual enrichment. But the few times we've darkened a yoga studio's door one of the first impressions we've noted is feet. Stinky feet.
Just sayin'.