Teacher Returns to Class After Controversial Lesson on Homosexual Animals

A Southwestern High School teacher in Piasa, Illinois, (outside of Alton) is back in the classroom today after a multi-day suspension for an assignment about homosexual behaviors in animals.

English teacher Dan DeLong was placed on paid leave last week after someone complained about the optional homework assignment he provided his sophomore students.

The homework had students read an article that challenged Darwin's theory of sexual selection by documenting hundreds of animals species that engaged in seemingly homosexual acts. 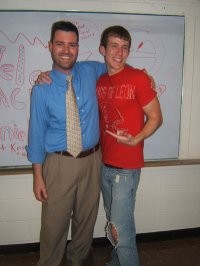 According to the The (Alton) Telegraph, more than 200 students and community members showed up last night to a meeting of the school district's 6 p.m. board meeting to protest DeLong's suspension. The meeting didn't adjourn until six hours later -- at 12:23 a.m. -- at which point DeLong and the board issued a joint statement.

In the statement  -- obtained today by Daily RFT -- DeLong states that the Board of Education and administration did not suspend him over "homophobic condemnation" but rather because of the age appropriateness of the material.

DeLong further stated that he was embarrassed about the attention his leave of absence has brought to the district, saying:  "our community has been unjustly misrepresented as bigoted and narrow-minded."