Over the Weekend: John Oates at the 'Stache Bash, Kelly Clarkson, Our Lady Peace and Plethora of Halloween Costumes

November 02, 2009 at 9:26 AM
comment
After a week where we rarely saw the sun, the weekend's weather seemed to make up for the days of gray. Besides Halloween, there was a lot going on and here's a recap of our weekend coverage.

John Oates at the 'Stache Bash

You might have read about Oates receiving a proclamation from St. Louis Mayor Francis Slay earlier in the day, but on Friday night, the second-half of Hall & Oates did what he does best at the 2009 'Stache Bash at the Roberts Orpheum Theatre. Read the full concert review here. Robin Wheeler writes:


Oates and his four-piece band started with "Camellia", the Oates-penned opening track from Hall and Oates' 1975 self-titled album. Marred by a sound mix that left Oates' vocals overpowered by the instruments, it wasn't looking good. But then he asked if there were any '80s fans before traipsing into a stripped-down version of "Maneater," and it all came together. Read more.


Our Lady Peace at the Pageant 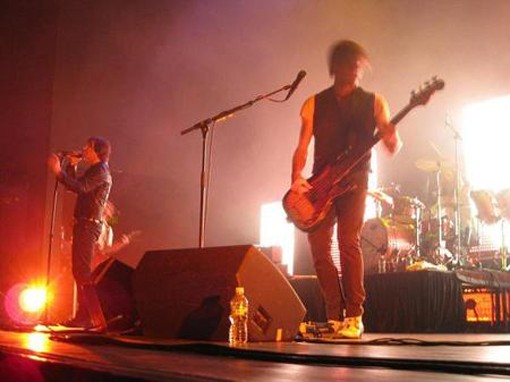 On Friday night Our Lady Peace and Company of Thieves rocked the Pageant. Shae Moseley was in the audience for the show and has this review.
Kelly Clarkson at Family Arena
On Saturday night, Moseley headed to the Family Arena in St. Charles to see the American Idol who's has the best post-Idol career: Kelly Clarkson. Moseley writes an open letter to Clarkson and it starts like this:

After finally getting a chance to attend one of your concerts last night at the Family Arena in St. Charles, I finally understand why I think you're such a fantastic pop songstress and performer. From the first slow-burning, disco-infused chorus of "All I Ever Wanted," your voice held the sparse but appreciative Halloween night audience in a state of hypnotic wonder at how such an everyday, girl next door could somehow possess the ability to shake the arena rafters with such seeming ease. Read more.

Nightlife photographer Egan O'Keefe shot the scene at Flamingo Bowl on Washington Avenue on Halloween. The usual Halloween costumes (homages to A Clockwork Orange and Marie Antionette among them) were there, in addition to newcomers "balloon boy" Falcon Heene, Kenny Powers and Robert Pattison in Twilight. See the full slideshow here.

There was also plenty going on in the street and in Lure nightclub, a few blocks west of Flamingo. See photos from Lure nightclub here.