On Any Given Sunday: The Horrific St. Louis Rams Can Beat the Terrible Detroit Lions 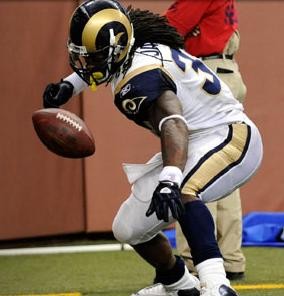 Yes, this is why we love the NFL! It's so unpredictable. Like yesterday, when you have a classic matchup such as the Rams vs. the Lions.

Here's a team -- St. Louis -- that until yesterday had lost 17 straight games playing against a Detroit franchise that has won just one contest all year and failed to win a single game in all of '08 -- to become the NFL's first franchise to finish a sixteen-game season without a victory.

But enough about that. Congratulations to the Rams! You gotta start somewhere. The team actually looked pretty sharp yesterday, scoring 17 points and winning the game in the fourth-quarter on a Steven Jackson 25-yard touchdown run -- his first trip to the end zone all season.

Finally, big kudos to you, Daily RFT readers. Three weeks ago we asked you when you thought the Rams would final win a game. The largest percentage of you picked Sunday's game versus Detroit. Check out the entire results of our poll here.