Oates tells Daily RFT he vividly recalls the day he shaved off the mustache he had worn throughout his meteoric rise up the pop charts in the 1980s.

"We were playing a concert in Tokyo in 1989 that Yoko Ono had arranged to commemorate the anniversary of John Lennon's death," says Oates. "I was going through a lot of personal stuff then, and after the show I was back in the hotel and just looking at myself in the bathroom mirror. I looked down toward the sink and there was a razor sitting there, and with that I shaved off the mustache and haven't look back."

So why did Oates decide to re-grow his famous lip hair after so many years?

Answer: For a worthy cause. As the honorary entertainer for 'Stache Bash 2009, Oates will help raise thousands of dollars tonight for Challenger Baseball, a St. Louis sports league for children with disabilities.

At a ceremony this morning in a downtown grocery store (and sponsor of 'Stache Bash), Mayor Francis Slay recognized Oates in declaring October 30 "Mustache Day" in St. Louis. 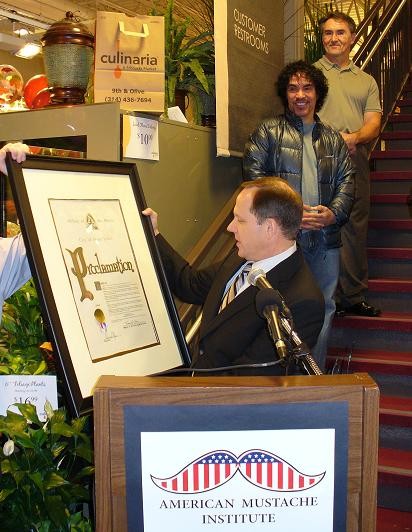 The proclamation read, in part:


Whereas, the learned citizens of St. Louis have demonstrated a keen appreciation for a handsome mustache, realizing that a well-fashioned lip-sweater knows no bounds of race, creed or color...
Whereas, the American Mustache Institute will reunite music legend John Oates with his mustache at Stache Bash 2009...
I hereby declare today, October 30, as "Mustache Day" in the City of St. Louis.

Oh, and by the way, Oates tells Daily RFT he's well aware of the cartoon series "J-Stache" about his mustache. In fact, he's a co-producer of the cartoon!