October 29, 2009 at 9:24 AM
comment
What could possibly be intriguing about the St. Louis Rams vs. Detroit Lions match-up on Sunday -- the game that pits the two worst NFL teams in recent memory against each other?

The pitiful squads have more in common than just losses it seems. Here are ten commonalities the pathetic squads share.

10. They both play in a dome.
Sure, it's a simple and obvious choice, but one that plays to the strengths (or lack there of) for both teams. There is no environment change to use as an excuse for the Rams to blow it in the end.

9. Two Defensive-Minded Head Coaches in First Year.
Both teams sought to rebuild their respective franchises with defensive-minded head coaches from good coaching pedigree. Steve Spagnuolo was hired by the Rams after two years as Defensive Coordinator to Giants and is a disciple of the Jim Johnson assistant tree. Detroit's Jim Schwartz was named Lions head coach after five years at Tennessee under Jim Fischer and he stems from the Bill Belichick coaching tree. Both coaches are from the New England area as well. 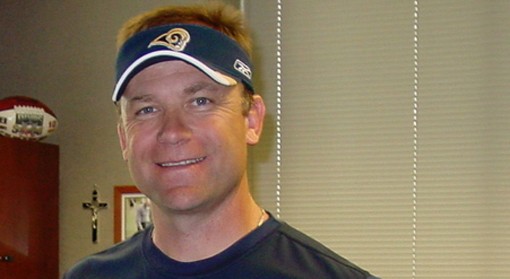 8. Scott Linehan.
The guy St. Louis just got rid of and couldn't hack it as head coach for the Rams is now the Offensive Coordinator for Detroit. Welcome back.

7. The Cunningham Connection.
Detroit Defensive Coordinator, Gunther Cunningham, once coached under Dick Vermeil at Kansas City. Vermeil, as Rams fans remember is the guy who won a Super Bowl for St. Louis.

6. Sylvester Croom.
After resigning his post as head coach at Mississippi State University, Sylvester Croom, found a home in STL where he is now the running backs coach. However, from 1997 to 2001 he was an offensive coordinator at Detroit.

5. 2006.
That was the last year these two teams played against one another. In that game Marc Bulger passed for 328 yards and three touchdowns to lead the Rams past the Lions, 41-34, in Week 4 of the 2006 season. Since then both teams have a combined for only 13 wins.

4. The Streak.
The Lions have won four of the past six meetings, but the Rams hold the overall series edge, 41-38-1, including the playoffs.

3. Under Pressure.
Detroit became the first team in NFL history last year to go 0-16 and from 2007 to 2009, it lost 19 straight regular-season games before beating the Redskins in Week 3 this year. Now it is the Rams who are facing a similar situation. St. Louis has lost 17 straight regular-season games and perhaps its best chance to win this year comes Sunday against the 1-5 Lions.

2. Steven Jackson.
Perhaps the only thing to smile about for the Rams faithful. St. Louis' star running back is the NFL's third-leading rusher this season, but he has yet to score a touchdown. This week's game may provide Jackson his best chance hit the endzone as the Lions have given up an NFC-high 31.3 points per game and average around a 115 yards allowed per game for rushing.


1. 1999.
This is the last time St. Louis won a Super Bowl and coincidentally it was the last time the Detroit Lions went to a play-off game. St. Louis went 13-3 and beat the Titans 23-16 in the big game. The Lions had an 8-8 year but a Wild Card playoff appearance where they lost to the Redskins 27-13 (hehe who's laughing now Washington?).
Kevin Coll is an avid blogger who owns FusedFilm.com, where he writes on entertainment news. Follow him on twitter @kent21685 and @fusedfilm.