October 28, 2009 at 8:59 AM
comment
If you, like many, have wondered why it's taken so long for pharmaceutical companies to roll out the new swine vaccine, here's your answer. 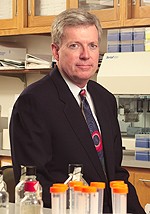 The vaccines must first be grown in fertilized chicken eggs, which requires getting a hen and a rooster to copulate -- no easy task when chickens aren't in the mood.

Of course, there are alternatives. Scientist can also grow the influenza virus inside the kidneys of dogs. Don't worry, no canines are harmed in process. (So they tell us.)

If that doesn't work, harvesting the vaccines from inside the bowels of caterpillars has also proven effective.

That's right, these cultures are grown up inside these animal cultures and then injected into your body all in the name of science.

We'll let Dr. Robert Belshe, director of the Center for Vaccine Development at Saint Louis University, explain how it works as he did yesterday to thousands of NPR listeners.

Listen to the NPR interview with Dr. Belshe here, or read the transcript of the conversation below.

From NPR News, this is ALL THINGS CONSIDERED. I'm Melissa Block at NPR West in California.

(Soundbite of a chicken)

SIEGEL: That's right, the process of making the vaccine uses chickens to make eggs. It's actually very chicken intensive. And there are some new methods in sight, but not quite in use here. Joining us to talk about his is Dr. Robert Belshe, who's director of the Center for Vaccine Development at St. Louis University.

Welcome to the program, Dr. Belshe.

SIEGEL: And first, tell us about the tried and true egg method.

Dr. BELSHE: Well, eggs turn out to be very, very susceptible to influenza. And it has to be a special egg. It has to be an embryonated egg. And a 10-day-old embryo is about the ideal culture medium for influenza. And so, vaccine manufacturers use embryonated hens' eggs to produce large quantities of influenza virus. And then they purify from that the vaccine that we use on an annual basis to prevent influenza.

SIEGEL: And part of the process, when the country orders up a batch of vaccine, is you've got to get those roosters and hens to work.

Dr. BELSHE: That's right. These are not the ordinary eggs you buy in the grocery store, which are generally not fertilized. But it requires a fertilized hen's egg. So you've got to have a rooster and a hen get together, do their thing, then the eggs have to be laid. And then they have to be incubated until about 10 days old for the ideal culture medium.

SIEGEL: Well, that's the egg method. What are the alternatives that are out there?

Dr. BELSHE: Well, instead of growing virus in eggs, it's possible to grow influenza virus in tissue culture. So these are cells that are selected from organs that are grown up in large quantities. And then one can grow influenza in these living cells. One of the cell lines that is very good at growing influenza is a dog kidney cell line.

SIEGEL: And would large numbers of dogs be sacrificed to make a batch of flu vaccine?

Dr. BELSHE: No, you don't have to sacrifice the dog in order to make the tissue culture. This tissue culture has been in existence for many, many years, and the cells can be grown essentially forever in the laboratory. And so, no animals need to be sacrificed.

Dr. BELSHE: Well, there are a lot of other technologies being developed for making influenza vaccine. We can make proteins in the laboratory using recombinant DNA technology. And the leading technology today is an insect tissue culture system. So it's grown up in, literally, caterpillar cells, and then produce lots and lots of protein that way.

SIEGEL: Now, when you think of, say, caterpillar cells being used in that example, how many days or how much risk could you knock of the production of a quantity of flu vaccine compared to what we're doing now with the eggs?

Dr. BELSHE: With the egg, it takes about two months. Tissue cultures - whether it's dog kidney or caterpillar cells - can be grown up in a matter of a few days. And so, you cut off a couple of months by going to these newer ways of manufacturing influenza vaccine.

SIEGEL: Dr. Belshe, thank you very much for talking with us today.

SIEGEL: That's Dr. Robert Belshe, who is director of the Center for Vaccine Development at St. Louis University in Missouri.