October 27, 2009 at 8:00 AM
comment
The report from the Environmental Protection Agency is hardly shocking. Yesterday the agency released test results indicating that as many as one-third of properties situated within a mile of the company's lead smelter in Herculaneum contain lead at levels exceeding 400 parts per million (ppm) -- the EPA's threshold for removing and replacing such soils. 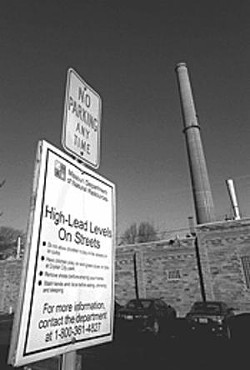 The Doe Run smelter has long history of poisoning iits neighbors, so much so that the company has been forced to buyout and/or clean up much of the property surrounding the facility.

Now the EPA warns that waste and runoff from the smelter continue to pollute.

Of 372 properties sampled recently in Herculaneum, 129 had at least one area exceeding the 400 ppm action level for lead. A total of 104 of those 129 "action level" properties have already undergone soil remediation within the past nine years, under work previously ordered by EPA.

"While Doe Run has taken some steps in recent years to reduce lead emissions, those efforts clearly fall short of what was necessary," said William Rice, acting regional administrator. "The re-contamination we are seeing in Herculaneum is unacceptable. EPA intends to work with the Missouri Department of Natural Resources (MDNR) to correct this problem by requiring Doe Run to implement a comprehensive, permanent solution to address this persistent problem."

Doe Run's facility in Herculaneum has been in operation for more than a century and is the largest smelter of its kind in the United States.

EPA's enforcement-related involvement with the facility began three decades ago, over concerns with air emissions, children's elevated blood lead levels, elevated lead levels in residential yard soils, and home interior dust in Herculaneum. Both EPA and the Missouri Department of Natural Resources have taken a number of enforcement actions against Doe Run over the years, including EPA's July 2009 unilateral administrative order, directing the company to sample and test gravel driveways and surface yard soils from all homes within one mile of the smelter.

Those tests, completed by a contractor hired by Doe Run, were completed last month, after which the company sent confidential letters to property owners and residents, informing them only of the test results from their respective properties. EPA received a full report of the sampling activity on October 8, 2009. A redacted copy of that report is available at http://www.epa.gov/region07/news_events/legal/.

"Together with our state partners, EPA intends to apply science and the law so that the residents of Herculaneum, particularly young children, do not remain vulnerable to the known health risks associated with toxic lead exposures," Rice said.