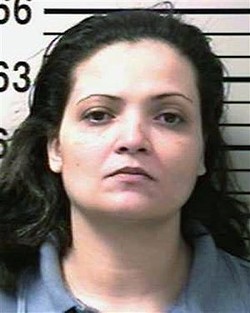 Michelle Riley, 37, pleaded guilty yesterday to first-degree murder in the death of a Dorthy Dixon, a 29-year-old, developmentally disabled woman.

According to Madison County prosecutors, Riley (and others) beat the pregnant Dixon with a plunger handle, routinely shot her with a BB gun and tortured her with a glue gun.

Dixon was found dead January 31, 2008, in an Alton basement where she'd been forced to live with little clothing and only a thin rug for furnishings. Her unborn baby died in the womb.

Prosecutors allege that Riley befriended Dixon in order to pocket her disability checks. Four other people, including Riley's teenage son, are scheduled for trial in Dixon's death.

Riley's sentencing will take place later this year. One wonders: Has Illinois lifted its moratorium on the death penalty?