October 26, 2009 at 10:08 AM
comment
Last week we noted how St. Louis is a terrible place for sports figures to launch affairs. Yesterday we saw our theory hold up when ESPN fired baseball analyst Steve Phillips. 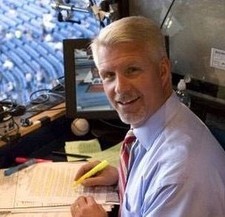 The former GM for the New York Mets, Phillips had quickly risen through the ranks of the sports network sitting alongside Jon Miller and Joe Morgan on the network's Sunday night broadcasts.

But news that he engaged in an extra-marital affair with a fellow ESPN employee, caused the sports channel to dismiss him Sunday. Phillips and 22-year-old Brooke Hundley first consummated their relationships in a St. Louis hotel room the week of the All-Star Game.

Hundley -- in explicit detail -- wrote a letter to Phillips' wife describing the affair and later stalked Phillips and his family. In a statement yesterday, ESPN said:

"Steve Phillips is no longer working for ESPN. His ability to be an effective representative for ESPN has been significantly and irreparably damaged, and it became evident it was time to part ways."


This is not the first time Phillips has been caught dipping his quill in the company ink, so to speak. In 1998 he admitted having an affair with a Mets' employee during his time as general manager for the New York franchise.