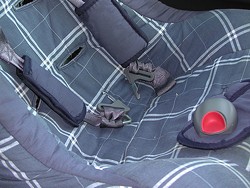 A chilling scenario: you buckle your two-year-old in her car seat, then leave for a minute. You return to find a shabby-looking man pulling her out. What would you do?

This happened to a mother in LaGrange, Missouri at about 7:30 a.m. Tuesday, according to the Hannibal Courier-Post. She dropped off her older child at daycare, but realized the child had forgotten a backpack. She made sure her two-year-old daughter was buckled in her Jeep Cherokee, then ran up to the building with the backpack.

When she came back, she says, the car door was open. A man in his mid-fifties with shoulder-length white hair and a white scraggly beard was leaning inside. He had the daughter unbuckled and in his hands.

Lt. Don Cibert of the LaGrange Police Department tells the Daily RFT that the mother says she then slammed the car door on his fingers but he got free. He turned and yelled at the woman for hurting him, then ran off.

Cibert says that in his ten years as a law enforcer in the area, he's never encountered an attempted kidnapping. The man was last seen in blue jeans and a long-sleeve, dark-blue t-shirt. Contact the LaGrange police at (573) 655-4611.