October 23, 2009 at 12:48 PM
comment
There are few easier ways to make an ass of yourself in public than by being a college football fan. The face-painting, the (usually off-key) singing, the shouting, the chanting, the marshmallow-throwing, the growling, the grunting, the hooting, the horns-hooking. The only redeeming factor is that when you do all these things, you are usually surrounded by a stadium full of like-minded idiots. 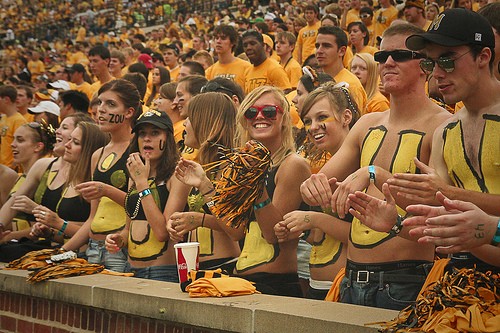 Now Hershey's has decided to isolate the idiots and get them to post videos on its website to compete for the dubious honor of College Football's Biggest Fan. Every week, we, the public, can vote in the Hershey's Big Fan contest. Then there will be a big face-off and the grand prize winner will get four tickets to the 2010 college football game of their choice, plus a tailgate sponsored by Hershey's. (Quick, which beer goes best with chocolate and comes in a keg?)

In the lead this week appears to be Jumpin' Jerry, a tailgater from the University of Louisville whose special fan-talent is shouting "Yeah!" a lot and spelling out C-A-R-D-S with his arms. (His spelling ain't got nothing on the O-H-I-O arm-waving folks at Ohio State. There's a reason St. Louis Cardinals fans don't spell at Busch Stadium, which Jerry makes abundantly clear: You can't tell what the hell he's supposed to be spelling.)

Clearly, this fool must be stopped.

Fortunately, a couple of Mizzou fans have made videos, both good examples of the two most popular Hershey's Big Fan genres:

If this isn't motivation enough, please note that this week's top five is heavily dominated by University of Texas fans and they, too, deserve to be toppled. Hook' em horns? Really?

(Note: The author's undergraduate institution has a well-deserved reputation for futility in football and basketball and just about every other sport except women's fencing and lacrosse, which doesn't get you much respect in Big Fan circles and may have contributed to some feelings of bitterness toward college football and its fans.)