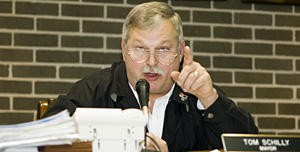 The residents of Crystal City opposed to an iron-ore smelter in their community had one of their wishes come true last week. State Auditor Susan Montee finally released her audit of City Hall.
The group Concerned Citizens for Crystal City (C4) organized a petition drive last year requiring the auditor to investigate the way the city conducts its business.
The audit found number of problems in the way the city solicits bids and purchases goods and services.
For example, the Crystal City Council approved the hiring of an outside law firm to defend it in lawsuits pertaining to Sunshine Law violations and real-estate transactions. The law firm charged $125 to $150 an hour for its work and billed the city $139,000 and $94,000 for work in '08 and '07. Meanwhile, city code allows payment of only $40-an-hour for outside counsel.
The audit also found payments for items and events that "do not appear to be prudent and necessary uses of city funds."
These include:
Another issue the C4 group had with the city was the "secretive" way in which the council members held closed-door and last-minute meetings to approve the $1-billion smelter proposal.
The audit found that many of the minutes and agendas regarding city meetings do not comply with state law. For example, the agenda for a key vote that initially approved the smelter project contained little information as to what the council would discuss at the meeting.
Per the audit:

"Although a tentative agenda is prepared and posted for each Council meeting, a standard format is used that does not disclose specific information pertaining to the upcoming meeting.  The agenda for the September 10, 2007, meeting did not list specific ordinances planned for discussion and passage for the purchase and subsequent lease of an industrial property.  Additionally, agendas are not prepared for committee meetings and are only occasionally prepared for work sessions held by the City Council.  Also, the date, time, and place the agenda was posted is not documented by the City Clerk and attached to the minutes."

View a condensed version of the audit or the whole enchilada (all 31-pages).
Also, check out RFT's 2008 feature story "Smelterville" for more details about the disagreements between City Hall and C4.