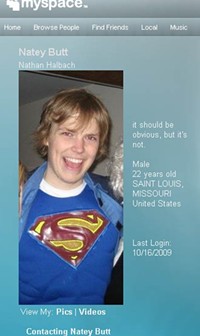 The St. Louis chapter of SNAP (Survivors' Network of those Abused by Priests) is on the lookout for girls or women who may have been abused by a Roman Catholic priest named Fr. Henry Willenborg, following a revelation last week that an O'Fallon resident fathered a child with Willenborg two decades ago.

"Willenborg lived and worked here [for eight or nine years] and we want to know if anyone was hurt by him," says Barbara Dorris, spokeswoman for SNAP's St. Louis chapter.

(Halbach got the last name of Bond's first husband, apparently to hide the fact he'd been fathered by a priest. After Bond and Willenborg split, Bond remarried and divorced two more times.)

Halbach is now 22. Three years ago he had to quit his studies at Mizzou when he learned he has brain cancer. For many years, and until Halbach turned 21, according to the Times, the Church paid Bond hush-money. But now Bond and Halbach both have cancer and are struggling to make ends meet. Bond wants the Church to help with expenses.

According to the riveting story by the Times' Laurie Goodstein, Willenborg was never much of a father to Halbach.

Dorris, of SNAP, said her group held a rally Friday and asked for the the Diocese of Superior in Wisconsin, where Willenborg is now based, to suspend the priest. The Associated Press reported that the Diocese put Willenborg on leave late Friday evening.

Dorris says Willenborg worked at the Franciscan brothers' provincial headquarters here for some time. "Our fear is that he still comes and goes frequently," she told RFT.