Pray for the People of Turkmenistan; Their Leaders Come to St. Louis for Advice 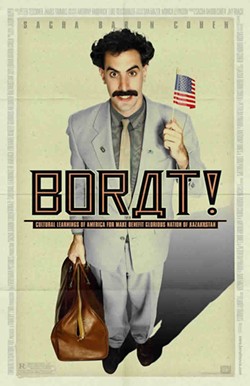 Sadly, this story has nothing to do with a Borat sequel, though it does have all the trappings of such a farce.
As Daily RFT has just learned, St. Louis played host last week to a cadre of dignitaries from Turkmenistan.
The group was here to survey our government and educational system and meet with officials such as Alderwoman Phyllis Young and former State Senator Harry Kennedy -- among others. As St. Louis Core, the website of Board of Aldermen President Lewis Reed, proclaimed:
"During their conversations with local elected officials, the Turkmenistan visitors mentioned how friendly everyone is and emphasized that St. Louis is a beautiful city that has many cultural attractions."
St. Louis Core also noted such factoids as:
Left out of the description, however, was this tidbit from the Transparency International: Turkmenistan is 13th most corrupt country in the world.
What's does that mean?
It means our Turkmen guests should have felt right at home with St. Louis' corrupt senators, representatives and police.
Who knows? Perhaps we did teach them a thing or two after all.