Missouri Inmate Indicted for Threat to Obama; "The President Needs to Be Shot for Fucking Our Country Around..." 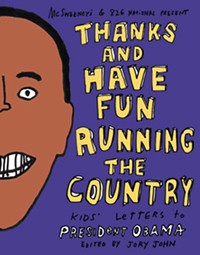 A Missouri inmate serving a five-year sentence for unlawful use of a weapon made threats to kill President Barack Obama, according to a federal indictment.
Josh Randall McCallum, 32, threatened to shoot the president in a letter mailed from the Northeast Correctional Center in Bowling Green on August 3. According to an indictment filed last week by Michael Reap, the Acting U.S. Attorney for Eastern Missouri, McCallum wrote:

"The president needs to be shot for fucking our country around like he has. If I was out there I would do it myself or at least try to. Anyone who has fucked our country over like this needs to die...When I get out all those I've mentioned will be dealt with. Let them know I'm coming."

McCallum pleaded guilty to the aforementioned weapons charge in 2007. Court records show that he's pleaded guilty and been tried and found guilty to other crimes in Missouri as well.
If convicted of the threats against the president, McCallum could face an additional five years in prison and/or fines up to $250,000. He is expected to appear in federal court this week.