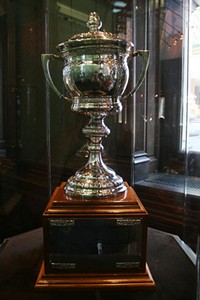 Unreal thinks we are just as worthy of the Nobel Peace Prize as President Obama. We have just as frequently expressed our support for world peace, though it's true, we've never really done it on the record in places like the New York Times.

But now we really have to object. This Obama love has gone entirely too far. As blogger Con Chapman on Salon.com's Open Salon "reports":

NEW YORK.  The National Hockey League today awarded the Lady Byng Memorial Trophy to Barack Obama, saying that while the President had never actually played hockey, the first nine months of his administration had changed the tone and tenor of the game for the better.

"President Obama has brought hope to scrawny forwards who face punishment each night from brawny defensemen and bruising enforcers," said NHL Commissioner Gary Bettman.  "While it is unusual to name the winner less than a month into the season, Mr. Obama's influence on 'the coolest game on earth' has been immeasurable."

The Lady Byng Trophy is awarded annually to the hockey player adjudged to have exhibited the best sportsmanship and most gentlemanly conduct in the league.  It is considered the hockey equivalent of the Nobel Peace Prize.

Hey, Gary! Unreal would like to inform you that a long time ago we used to play floor hockey in the most courteous and peaceful manner possible. (That is to say, we made it a point to stay as far from the main action as possible. We never really relished first-period gym.) Wanna consider us for the Lady Byng next year?