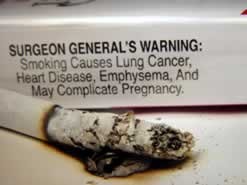 The signs would be posted prominently inside the establishments and state: "Warning: Smoking Allowed Here." (St. Louis is one of the minority of U.S. cities without a smoking ban.)

The idea for the signs was hashed out yesterday in a committee meeting in which the city's Board of Aldermen is considering a smoking-ban bill first introduced last May. Passage of the controversial bill still needs full approval from the board, and would only become law if voters in neighboring St. Louis County pass a similar smoking-ban issue in November.

As it stands now, the smoking-ban bill is a watered-down version of the original, thanks in part to aldermen frightened that the ban will impact sales taxes generated from tavern-goers known for their love affair of tobacco and beer -- especially the brew from St. Louis' own Anheuser-Busch. It also doesn't help that three of the city's 28 aldermen happen to be bar owners.

The original bill (viewable here) would have banned smoking in all bars and restaurants as well as casinos.

The amended bill, in turn, would allow smoking in casinos. Also, any tavern under 1,500 square feet in size would be exempted from the ban for a period of five years -- so long as the bar posts a warning sign.

And you know how effective those signs can be -- what with all the kiddies who see the Surgeon General's Warning on that first pack of Marlboro Lights and vow never to smoke again.