Post-Season Throwdown: What They're Saying in New York, Denver, Minneapolis 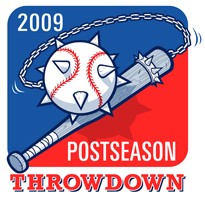 Coming off the three-hour, 54-minute letdown last night in Los Angeles, there's nothing we want more than to look ahead to this afternoon's Game 2 start time of 5:07 p.m. and put Matt Holliday's plate failures and Chris Carpenter's perplexing inability to find the outside of the plate behind us.

To get your mind off all that -- if only for a few brief moments on this saturated Thursday afternoon -- here's what they're saying in other cities. Take comfort: that the nail-biting, cursing, nervous wreck of a human you've become in the past 24 hours or so is not all that uncommon. Hell, in New York, there's some babe who's dubbed herself "Crazy Yankee Chick."

It's also comforting to know that in Minnesota, the traditionally wholesome population has been turned into hateful fans, dontchaknow. For the most part, we St. Louisans would have to agree with the Twin Cities' distaste for all things Yankee, with one notable exception: This Guy. There's no reason to hate him. You should apologize.

They're still reeling out in Denver, after Cliff Lee's complete-game gem against the Rockies. Denver blogger Michael Roberts claims it was a fluke, or more to the matter, just a Wacky Wednesday.

Tonight, the (take a breath) Los Angeles Angels of Anaheim play the Red Sox. And while it's tough to get amped up over anything when you live next to the friggin' beach, Angels fans seem to be trying to their damndest, going as far as writing a list of 26 reasons why they hate the Red Sox.

Is our list of reasons to hate the Sox -- penned back in June 2008 -- filled with more pent-up rage at the Bo'Sox? Maybe. But theirs is certainly worth a look.