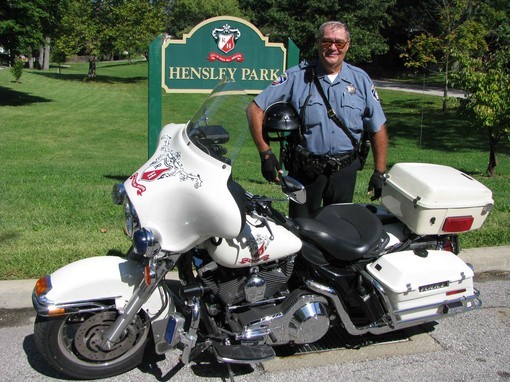 ​ Gentlemen, start your engines. Twenty-six years and 150,000 traffic tickets later, Rock Hill's rainmaker is hanging up his radar gun. You heard right folks, Officer Ronald Zeigler will soon write his final speeding citation. To be more precise, you have until his shift ends at 7 p.m. on October 20 to get his autograph, and he'll only be too happy to oblige.


With Zeigler riding into the sunset -- or at least to his home in Marthasville (the site of Daniel Boone's original grave) -- the city's coffers may never be as full again, and most assuredly, Manchester Road will never move as gingerly again.

"He was the highest monthly performer we ever had," boasts Rock Hill Police Chief Paul Arnett, who runs the ten-man department.

Zeigler, a folksy, good-humored, dog-loving man from Coffeyville, Kansas, is the Cal Ripken of ticket writing. Never misses a day, has an unparalled work ethic, keeps himself and motorcycle in fine working order, and, as a result, has chalked up some damn impressive statistics.

On a good day, Zeigler will write up to 60 tickets and barely break a sweat. He's got a lifetime average of nailing some 420 motorists a month.

City officials say it's just not possible to put a number on how much money Zeigler has generated.

Zeigler's ticket-writing prowess has, fairly or not, given the St. Louis suburb of 5,000 residents a regional reputation as something of a speed trap.

The 67-year-old cop, who spent a dozen years as a patrolman in Brentwood before becoming a bane to Rock Hill motorists, admits that image will likely linger, but insists he'll only issue a ticket to anyone traveling in excess of ten miles over the speed limit. On Manchester, his primary haunt, that means going at least 40 miles an hour.

Asked in an interview Tuesday at Rock Hill police headquarters whether he's ever been talked out of a ticket, Zeigler smiles wide and says, "Oh yeah, occasionally that happens. I figure I let about one in ten go with a warning.

"But it's kind of funny. I do remember stopping this SUV for speeding on the 92nd block of Manchester, and when I approached the vehicle these two black labs popped up off the floor board and starting licking me. I didn't give a ticket that time."

"'I thought the speed limit was 40.' I don't know how many people have told me that. It's also amazing how many tell me, 'You stopped me 'cause I'm driving a red car.'"

Of the many thousands of encounters Zeigler has had on Rock Hill's byways, few, he says, compare to the day he pulled over woman in her late 40s, heading west on Manchester.

"So I write up the ticket and come back to her car and ask her to sign it," Zeigler recalls. "She tells me she's going to kill herself. Then she gets out of the car and starts beating her head against a concrete wall. There was blood everywhere, and I had to call an ambulance."

Another memorable stop occurred in the mid-1980s, not long after Zeigler joined Rock Hill's finest. "I gave this ticket to a guy who was speeding on McKnight. Well, it turns out it was Stan Musial. I guess I didn't know it at the time or put two and two together. But anyway, the department called me sometime later and said, 'Do you know you just gave a ticket to Stan Musial?'"

The incident must have made some impression on the Cardinals great, for in 1985, when Zeigler was selected State of Missouri Traffic Officer of the Year, it was Stan The Man who presented the award.

Zeigler says he looks forward to retirement, to painting the house, fixing up the garden, doing some long-neglected landscapingand being with his wife of 43 years, Earline.