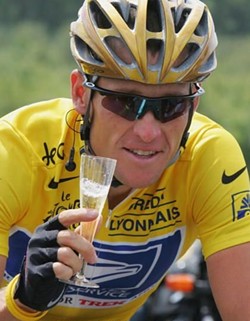 Details are emerging on that endorsement deal we mentioned yesterday between cyclist Lance Armstrong and Michelob Ultra.

Armstrong was in St. Louis yesterday to publicly unveil the endorsement at the AB brewery on Pestalozzi Street.

According to an article today on BusinessWeek's website, Armstrong inked a three-year deal with AB InBev that will have the seven-time Tour de France champ appearing in two Michelob Ultra commercials as well as lending his name and image for billboard and print ads and possibly packaging.

One of the commercials, titled "Little Bumps", will show Armstrong pedaling up a steep peak. The message of the ad: "Some people see mountains, others see little bumps."

Look for the commercials by the end of the year or soon thereafter.

Financial terms of the endorsement were not revealed. Armstrong told the Associated Press that the low-calorie beer fits his image of healthy living.

"The key word is we tried to be authentic," said Armstrong. "You don't want to be in a place where you're putting your name or face or likeness in any old thing that comes along and whispers in your ear."