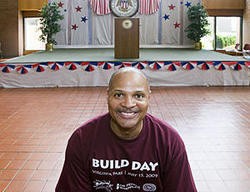 East St. Louis mayor and liquor commissioner Alvin Parks may have finally had it with his city's nightclubs. After a bloody weekend that left four people injured or dead in two days at nightspots scattered across town, Parks says last call at the bars will be rolled back--at least for the time being-- from 6 a.m. to 1 a.m.

Parks, who was at the scene of one of the murders--a fatal shooting at 3:14 a.m. at Club 2151-- when it occurred Saturday, told the Belleville News-Democrat that he was "very, very disappointed" after the latest round of violence attributed to East St. Louis' nightlife.

Earlier this year, Parks came under fire from metro east law enforcement officials and rival city leaders when the Illinois State Patrol revealed that fifteen homicides over the past five years had "came directly out of East St. Louis nightclubs." Many in the community urged the mayor then to tighten restrictions on liquor sales but he resisted, arguing that the clubs were not solely to blame for the violence and that the cash-starved city relied heavily on them for tax revenue.

The city's nightlife had been tranquil until the bloodshed began Friday morning at Club Etta.

In that incident, a couple was wounded leaving the club, located at 609 N 73rd Street, at 4 a.m. Parks suspended the club's liquor license and scheduled a hearing Monday morning to determine the business' future.

The BND has the details on the two murders that occurred Saturday:

The fight continued outside the club, where Seay was shot, Detective Michael Floore said. Seay was shot in the knee and head and was pronounced dead at 3:14 a.m., Stone said.

Floore said police took two persons of interest into the police station for questioning. One of the two was later released, he said.

About an hour later at 4:22 a.m., Rice, of 173 Rou des Chateaux, Apt. D, was pronounced dead near the City Nights nightclub after being involved in a disturbance inside the club, Stone said. The club is located at 1100 S. Eighth St.

Police originally received a call describing the incident as a carjacking, but arrived to find that the victim had been run over by a car, Floore said.

"He died from multiple trauma to the body," Stone said.


View Larger Map
Later Saturday, the mayor announced that liquor sales in the city would temporarily cease at 1 a.m. He has scheduled a meeting at 11:30 a.m. on Wednesday to discuss closing hours and security measures for the nightclubs. All liquor license holders in the city are required to attend.

This is not the first such meeting.

At the height of the controversy earlier this year--which included a scandal that ended with Parks' deputy liquor commissioner being indicted for extortion and the FBI raiding offices at East St. Louis City Hall-- the mayor gathered the city's bar owners and announced that each establishment would be required to post signs stating "no weapons allowed."

No additional laws or restrictions were added but Parks offered "strong, strong suggestions" that included increased security (one bouncer per 75 patrons), lighting, and awareness.

On Saturday, Parks told the BND that he may finally be ready to crack down.

"Obviously, when situations like these take place and you have violence in this community and across the country, it certainly makes you consider doing something different," he said.

Check back with Daily RFT for updates on this story as it develops.