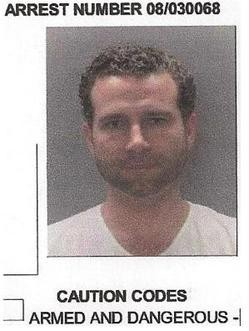 Clad in a beige jumpsuit stamped "Co. Jail", Milton "Skip" Ohlsen arrived in federal court this morning for sentencing on guilty pleas to being a felon in possession of firearms and mortgage fraud.
Ohlsen's appearance before judge Henry Autrey was the defendant's first public appearance since his name became entangled in the political downfalls of former state senator Jeff Smith and state representative Steve Brown in August. It was also the first time Ohlsen has faced the public since being named as a possible suspect in a bombing last year in Clayton.
Neither of those high-profile cases were mentioned today in court.
Instead, Acting U.S. Attorney Michael Reap and Ohlsen's attorney Paul D'Agrosa spent more than two hours debating before the judge whether the defendant knew he was in possession of a stolen firearm and knowingly lied on mortgage and bankruptcy documents.
In the end, Autrey sentenced Ohlsen to the maximum amount of time permitted under federal statutes -- 30 months in prison.
During today's hearing, Reap presented evidence indicating that in 2001 Ohlsen used a fake name of "Mike Scott" to purchase accessories -- including new gun barrels and a silencer-like sound muffler -- for a Glock handgun reported stolen in 1998.
D'Agrosa, in turn, submitted an affidavit from the gun's original owner stating that he and Ohlsen were once business partners and the gun accidently came into the possession of Ohlsen. But D'Agrosa's argument did little to assuage the judge, who questioned whether the "gun fairies" had placed the Glock in Ohlsen's possession when he was pulled over in Ladue in December 2007.
Prosecutors eventually found Ohlsen to be in possession of several handguns and more than 500 rounds of ammunition. As a convicted felon for a drug trafficking in the early 1990s, Ohlsen is not legally permitted to own firearms.
As to the mortgage fraud, Reap presented evidence showing that Ohlsen submitted falsified documents in order to refinance his Town & Country home and filled out loan applications  erroneously stating his income was $15,000 a month. Reap argued that the money Ohlsen claimed as income was actually investments that financial backers had invested in Ohlsen's mixed-martial arts company Genesis MMA. (Click here for more on that story.) Ohlsen's reported income for all of 2006 was $290, according to Reap.
D'Agrosa countered that lender CountryWide should share the blame for Ohlsen's house going into foreclosure for appraising the home at $668,000 (it's now appraised at around $300,000) and contributing to an era of questionable mortgage lending that brought on a collapse in the housing market.
Reap wrapped up his arguments by painting Ohlsen as a person who says one thing, but does the other. "The facade of Milton Ohlsen is nothing but fraud and deception," Reap told the judge. "We're dealing here with someone who will lie, cheat and steal to get what they want."
Speaking on his own behalf, Ohlsen admitted he was guilty of "blurring the lines" between right and wrong and apologized to "everyone whose reputation has been stung by association with me." He also talked about his love for his children and his custody battles with his ex-wife Michelle Ohlsen, who provided prosecutors with evidence. "I regret hurting my wife by cheating," said Ohlsen. "I pray when I'm released she'll quit hurting our children for my infidelity."
Autrey could have sentenced Ohlsen to as little as two years in prison for both crimes but chose the maximum allowed under federal guidelines -- 2.5 years. In addition, Ohlsen is to repay $99,871 in restitution to CountryWide.
Autrey said that he hoped Ohlsen would take his promises to heart and learn from his mistakes.