Cheer Up Chicago, You Did Have the Olympics Once, Kind Of

​ Alas Chicago! First of the 2016 Olympic Final Four to get knocked out of contention! After you dropped $50 million and sent President and Mrs. Obama and Oprah to Copenhagen to campaign on your behalf! (Not to mention thoroughly pissing off your citizens by raising sales tax to 10 percent and cracking down so hard on parking violations that people are terrified to leave their cars at the meter 30 seconds past expiration.)

Let all St. Louisans pause a moment to wipe away a tear of sympathy for our 300-miles-to-the-northeast neighbor, who, in a grand show of its largess, had graciously promised to let us join in the hype by allowing us to host athletes in training and preliminary soccer matches. Oh, the honor!

Wait, you say, we had those Olympics!

In 1902, St. Louis was embroiled in plans for the World's Fair, originally planned for 1903. But things weren't coming together as quickly as planned and the Fair was postponed a year...which would put it in direct competition with the Olympics in Chicago. Really, how many trips to the American Midwest in one summer could people be expected to endure?

Besides, Chicago had already stolen the 1893 World's Fair (which was what had drawn the Olympic organizers' attention to the city in the first place) and, to add insult to injury, had reversed the flow of the Chicago River to keep their sewage out of Lake Michigan, instead sending it downriver to us. They weren't going to ruin our World's Fair! 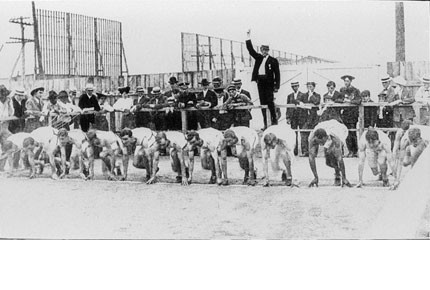 So the World's Fair organizers very cleverly wrote to the Olympic Committee, explaining that St. Louis was planning its own sporting exhibitions in conjunction with the Fair, and wouldn't it make more sense to move the Olympics a mere 300 miles and combine the events?

As we all know, the Olympic organizers appreciated the logic behind this eminently reasonable plan. The Games moved from the Chicago lakefront to Washington University, and there were songs and laughter and hot dogs, and St. Louis has not enjoyed any international attention since.

(For a more complete -- though slightly Chicago-centric -- account of these events, check out this report from Chicago Public Radio.)
For some reason, though, Chicago, which went on to host another World's Fair and the World Cup and produce Michael Jordan, Oprah and a U.S. President, is still bitter. In an article in the Chicago Tribune last Sunday covering the history of the Olympic Games, reporter Mark Jacob wrote:

Chicago was supposed to host the 1904 Olympics, but St. Louis stole it
away. The Games were a fiasco. Only 14 of 32 participants finished the
marathon, which was held in 90-degree heat with a single water well at
the 12-mile mark. Cuban marathoner Felix Carvajal, who lost his money
in a craps game in New Orleans, hitchhiked to St. Louis and ran the
race in street shoes. He stopped to chat with spectators and to steal
apples from an orchard but still finished fourth. American Fred Lorz
dropped out after nine miles, rode in a car for 11, then rejoined the
race and crossed the finish line first, quickly admitting his hoax. The
prize went to American Thomas Hicks, whose supporters gave him
strychnine (a stimulant in low doses) and brandy -- the first known use
of performance-enhancing drugs in the Olympics.

Bitter much? Can't wait to hear what they have to say about Rio.