​ It's the beginning of October, and that means it's the season to stand in line outside a building blasting pulsating, industrial music and then paying to have for some creep come up behind you and scream bloody murder. But enough about downtown St. Louis! It's haunted house season, and a local haunted house has again made the top five this year, according to a group that ranks such emporiums of fake blood and dead babies.

From Hauntworld.com ("The Internet's #1 Haunted House Website") comes this year's rankings, and "The Darkness" in Soulard comes in at  No. 4 on the list ("The Beast" in Kansas City comes in at No. 3.)

Haunted houses are big bloody tributes to kitsch horror movies, magnets for fans of Rob Zombie films and those who can rank the sequels in the Saw franchise by the torture scenes. And while the black-lights, foam skeletons and swinging pig carcasses slightly shock the senses, it's usually the dark-robed employee who jumps out from a corner that really wets your pants. That's why, despite all the didn't these people ever grow up!? inner-monologues one has while passing by a haunted house, they still seem to rake in the cash each October.

Here's a rundown of the 13 best, or worst, as it were, haunted houses in the country:

13. Graystone Manor - Killen, Alabama
When visiting this southern haunted house, be sure to stop by Dead Debbie's, which apparently is one of the few haunted houses with a dedicated eatery. If you don't die of fright, the chili cheese fries, deep-fried candy bars and mozzarella sticks will be sure to kill you in a few decades. And yes, Killen, Alabama is a real place. 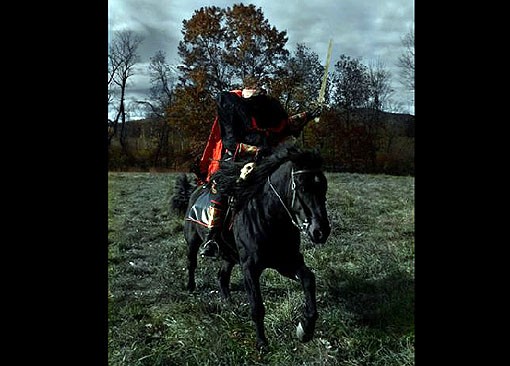 12. Headless Horseman - Ulster Park, New York
This haunted attraction is about 100 miles north of New York City and has fully embraced social media -- check out the dead bird Twitter logo -- as well as traditional methods of reaching customers, like chasing them during haunted hayrides.

11. Dead Acres - Columbus, Ohio
The best haunted house websites show pictures of real people actually shrieking in horror at the plastic monsters. Dead Acres boasts this on its website, which should tell you all you need to know about the confidence these Buckeyes have in their ability to scare you: "What makes dead acres so bad ass? We set out to stand out. Dead Acres is a full sensory assault."

10. House of Shock - New Orleans, Louisiana
The guys who run House of Shock -- already located in one of the spookiest cities in America -- have been featured on the Travel Channel and Fuse TV for their haunted house. It thankfully includes some bizarre satanic altars in addition the same-ol'-same-ol' grouping of slaughtered innocents and brain-hungry zombies. There's also an impressive multi-media stage show: "Performed 2-3 times nightly, this ornately choreographed performance is highlighted with live actors, stunts, music, video, state of the art lighting, pneumatic effects and more pyrotechnics than a full on rock concert!"

9. Bayville Screampark - Long Island, New York
We can't confirm reports that Dee Synder is behind that pig mask, but this New York haunted theme park has a "several-hundred-thousand-dollar" facade, and that's just the outside. It's operated by the same company that owns the Jekyll and Hyde Pub in New York City, and while the latter is a bit of a tourist trap, the theme park comes in at a strong No. 9. And they're hiring.

8. Haunted Schoolhouse - Akron, Ohio
Even the Haunted Schoolhouse's website will make you jump -- it still uses that technology trick of yesteryear. This Ohio theme park has been around for 36 years and is likely the only thing scarier than a layoff in this former industrial hub.

7. Bates Motel - Philadelphia, Pennsylvania
Another "scream park" here, with multiple haunted houses within its facility. In addition to the pyrotechnics and haunted hayrides, the Bates Motel offers perhaps the scariest thing of all: a contest to win free Peal Jam tickets.

6. Dent Schoolhouse - Cincinnati, Ohio
This haunted attraction is new to the top 13 list and has an authenticity that's refreshing. Plus they say it's actually haunted by a real ghost, not just crawling with caffeinated teenagers.

5. House of Torment - Austin, Texas
"Keep Austin Weird," can become a tired saying very quickly in this Texan city, but this haunted house is just that. And this haunted attraction gets points for its photo booth where one can pose with, umm, zombified Army vets.

4. The Darkness - St. Louis, Missouri
Soulard is likely one of the scariest-looking neighborhoods in St. Louis: the brick houses styled in a way of your great-great grandparents' era and everything feels so creepy -- especially at night. On the north side of this neighborhood is The Darkness, a multi-level haunted attraction we've photographed and recorded on video. It's no surprise to St. Louisans that The Darness is on the list. For more reading, see our RFT feature story on the guys who run the Darkness.


3. The Beast - Kansas City, Missouri
Across the state in Kansas City, the Beast lays claim to being one of the "biggest and best indoor haunted attractions in the nation," because it boasts five stories of thrills. Thankfully there are plenty of abandoned buildings in Kansas City to accommodate the kind of fright fests the citizens of that fine city deserve. A crew from the Travel Channel cable network was at The Beast last month and an episode featuring the mammoth haunted attraction should air later this month.

1. 13th Gate Haunted House - Baton Rouge, Louisiana
For the second consecutive year, this haunted house takes top ranking. The company, Midnight Productions, is based out of rural Pollack, Louisiana, where employees work year-round in a 7,000-square foot warehouse, building bizarre props and set-ups that are sure to desensitize them. The company runs haunted houses, hayrides and the Maize, a horrific labyrinth from the corn.