Should Drunks Be Allowed to Carry Guns? 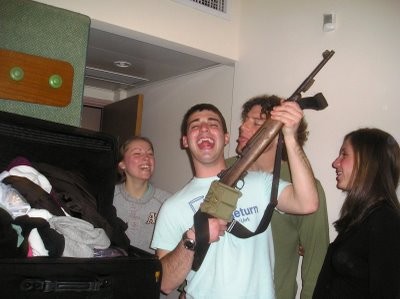 That's the question that will soon be pondered by the Missouri Supreme Court.

Missouri's highest court decided to hear the appeal of John L. Richard, a Mississippi County man who, after his wife left him in 2006, popped morphine and anti-depressants, guzzled booze, grabbed a loaded 9 mm Beretta pistol and spare clip, barricaded himself in his home and told the cops he was either going to shoot himself or make them do it for him.

There is actually a school of thought that says Richard was totally within his rights and the state had no authority to confiscate his weapons or arrest him. Because, as this Google News search reveals, nothing ever goes wrong when loaded people pick up loaded weapons.

Missouri assistant attorney general Karen Kramer told judges yesterday that Richard should be prosecuted "because the state has a legitimate interest in restricting guns from intoxicated people to protect public safety."

It is currently illegal to posses or discharge a firearm while intoxicated in Missouri, but Craig Johnston, Richard's public defender, argues that "the law also creates questions about whether intoxicated people could be prosecuted for picking up a gun when they mistakenly believed they needed to defend themselves."

Give your opinion on the issue in a poll after the jump and hear how a current case being heard by the U.S. Supreme Court could affect the outcome of Richard's case.

Coincidentally, the U.S. Supreme Court announced yesterday that it will hear a case that will decide whether state's gun laws trump those of the federal government and covers almost the exact same issue at the heart of Richard's case in Missouri.

The NYT has a lengthy story on the issue, including context, opinions from legal scholars, and an estimate that the case will not be decided until next June. Here's the jist, though:


The Second Amendment case, McDonald v. Chicago, No. 08-1521, addresses a question that was left open last year when the court decided that the Second Amendment protects an individual right to own firearms rather than a collective right tied to state militias.

Last year's decision, District of Columbia v. Heller, concerned only federal laws and struck down parts of the gun control law in the District of Columbia, a federal enclave. The court ruled that the law violated the Second Amendment by barring law-abiding people from keeping guns in their homes for self-defense.

The new case was brought by residents of Chicago who say their city's handgun ban is identical to the one struck down in Heller.

Several Supreme Court decisions, all more than a century old, have said that the Second Amendment does not apply to the states.