By the Boards: Dennis Brown on the STL Theater Scene October 1-4 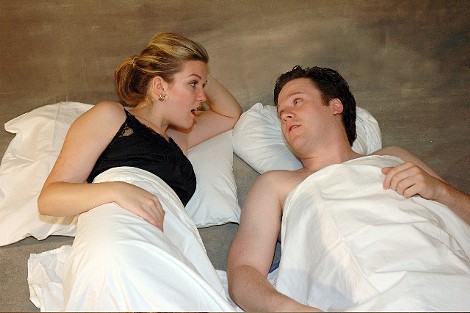 There was a lovely ambiance last weekend in the old mall corridor at Crestwood Court. Three plays were opening within just a few doors of each other. People would spot friends and call out, "What are you going to see?"

"Portrait of My People at Avalon. What about you?"

"The Last Memory of an Ol' Brownie Fan at First Run."

Then they'd encounter a third friend en route to The Secretaries at Echo. St. Louis had a real Theater Row, with all the energy of a theater row. All three shows continue this weekend, so if you're headed to Crestwood Court be on the lookout for people you know.

October is a jampacked month. In addition to the holdovers, there is a tremendous range among this week's new offerings, which include the season's first university productions. I'll say it yet again: The college shows often provide the best deals -- and the most satisfying quality -- in town.

The Webster University Conservatory of Theatre Arts opens the Stephen Sondheim-George Furth musical Company, which was a groundbreaker when it premiered in 1970. People were not accustomed to a musical with such an ephemeral plot; much of the piece is akin to an extended variety show. Company likely won't feel quite so revolutionary today, but the Sondheim score will sound as fresh as ever. The production is in the capable hands of director David Caldwell and musical director Neal Richardson -- the same duo that has done marvelously compatible work at Webster with such musicals as Violet and A New Brain. (Through October 11 at the Loretto-Hilton Center, 130 Edgar Road, Webster Groves. Tickets are $12, $6 for students and seniors.Call 314-968-7128 or click here.)

Over Due Theatre Company is staging Lady in the Dark, whose theme of psychoanalysis was downright shocking when the show opened on Broadway in 1940. With a book by Moss Hart, music by Kurt Weill and lyrics by Ira Gershwin, it was a sensation. This is another show that time has caught up to, but it's always a treat to hear Weill and Gershwin. Over Due stages its shows at the Olivette Community Center. (If your musical tastes run to the more familiar, The Phantom of the Opera is back at the Fox until October 25.)

A different kind of music will stream forth from the stage of the Heagney Theatre at Nerinx Hall in Webster Groves. William Luce's The Belle of Amherst, a one-person portraiture of Emily Dickinson, will be staged by Insight Theatre Company. The Massachusetts poet will be enacted by Susie Wall. And be warned: The evening performances at Insight start at 7:30 p.m. Arriving late has become a sort of habit for some Insight theatergoers. New Jewish Theatre is also adhering to a 7:30 p.m. curtain for Conversations With My Father, Herb Gardner's memory play that opens the new season this weekend.

Saint Louis University also opens its theater season this weekend, with Ionesco's absurdist comedy The Bald Soprano. I remember when I acted in that one during my university days. I didn't know what it was about then, and I still don't. But it can be a lot of fun.