Toyota Owns Up to Acceleration Issue in Prius, Other Models 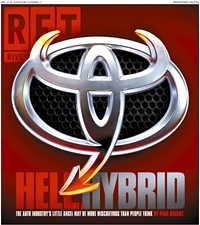 Yesterday Toyota acknowledged that several makes of its automobiles can experience an acceleration risk.
The car maker says a floor mat in its Prius, Camry, Avalon, Tacoma, Tundra and several of its Lexus models can interfere with the accelerator and cause a crash.
An April feature in Riverfront Times brought attention to the acceleration issue in the Toyota Prius. Several Prius owners recounted in that story how the hybrid cars would continue to accelerate despite the driver applying the brakes.
Yesterday's recall announcement of 3.8 million cars is Toyota's largest ever. Owners of the Toyota models (detailed here) are encouraged to remove the the floor mat under the driver's seat immediately.