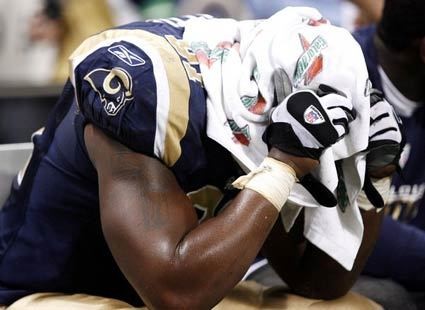 Parking around the Edward Jones Dome is a nightmare. The nearby lots all price gouge on game days, many places don't allow tailgating, traffic is a complete clusterf***, and after all that hassle fans get the pleasure of seeing the worst team in football get their helmets handed to them by the opponent du jour.

The obvious solution is to take Metrolink, which stops a mere three blocks from the Dome, but before last week's match-up against the Packers a half-dozen penny-pinching Rams fans got the bright idea to park in East St. Louis and then make their way across the river to the game.

Guess what happened next.

Via the Belleville News-Democrat:


Police are investigating cars being broken into while their owners attended a St. Louis Rams game Sunday.

Six vehicles were broken into while parked on a lot located at 2003 Park Drive. The lot is a free lot that does not have security, police said.

Detective Michael Floore said the owners left the cars there sometime before noon and returned about 4 p.m.

Wait till you see where in East Boogie the cars were parked:

Not even Google Street View goes there. Guessing a group met there, then drove across the river and parked one car in a lot near the Dome.

But hey, at least the dedicated fans got to see another hard-fought victory by the boys in blue and gold right?