Don C. Weir, the Town & Country financial advisor who stole some $12 million in precious-metal coin investments from 44 clients, was sentenced Wednesday to six and a half years in federal prison.

Judge Sippel also ordered Weir to pay over $12 million in restitution, an amount which may be revised by the Court in the near future.

Dressed in dark slacks and a gray blazer, the 55-year-old Weir betrayed little emotion upon hearing his sentence, which was handed down to a full courtroom inside the Thomas Eagleton U.S. Courthouse. In attendance were members of Weir's family and several victims, five of whom read aloud statements about how Weir had affected their lives.

Dorothy Gamache, an 81-year-old widow, told the court she may be forced to sell her home because Weir had defrauded her. After reading her statement, she turned to Weir and said, "I hope you will enjoy your future accommodations."


Another victim, Lynn Neill, told the court, "If I were Mr. Weir, I would be very worried about the day he faces God's wrath."

Weir himself read a statement, saying he was "deeply ashamed," and that he'd betrayed his Christian faith, exposed himself as a hypocrite and caused people to question Christianity. "I'm totally committed to making restitution to my victims," he said

Weir mentioned a long battle with mental illness, but said that "the hurtful decisions and actions taken were mine and mine alone."

The former financial advisor's St. Louis attorney, N. Scott Rosenblum, made mental illness the basis of his push for a sentence shorter than the 78 to 97 months recommended in the federal sentencing guidelines. "This is a man who has been sick for a very long time," Rosenblulm said. 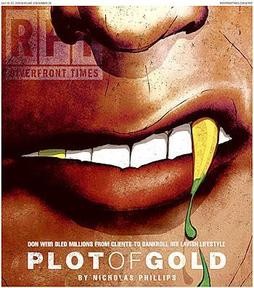 He called to the stand a forensic pyschiatrist who testified that bipolar illness suffered by Weir "substantially contributed" to his criminal behavior.

Rosenblum added that Weir spent over 1,200 hours in the probation office helping identify and evaluate his victims' coins to restore some of their losses, without ever asking how it would benefit him during sentencing.

Assistant U.S. Attorney Matt Schelp conceded that Weir's cooperation had been indeed been "extraordinary," but questioned the impact that bipolar disorder had on his crimes. Schelp said Weir committed a "dramatic fraud" and knowingly concealed the scam from his clients.

Schelp further argued that while Weir did make some "Robin Hood" payments to people in financial need, these payments represented a small percentage of the millions stolen (some $500,000). Weir spent most of the money, Schelp said, to maintain his own lifestyle and to further his scheme. "Greed," Schelp said, was "the bottom line."

In his final sentencing, Judge Sippel wished Weir good luck, and granted a request to let him surrender himself to U.S. probation office at a later date to begin his sentence.