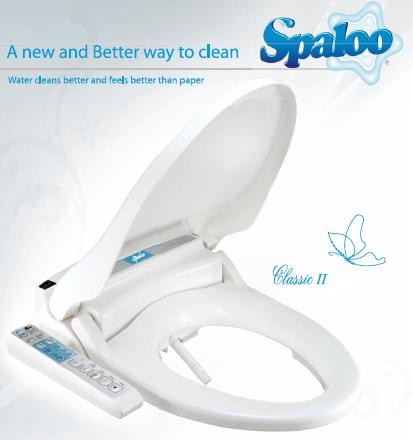 Unreal had a pleasant conversation today with our old friend Bruce Santhuff -- the St. Louis native and founder of the Riverfront-Times-endorsed Spaloo toilet seats.

What makes these toilets seats so special? Well, for starters, they're only the best-darned automated keister cleaners this side of Tokyo.

And now they're getting even better! That's right. Santhuff informs Unreal that he's launching two new models, the Spaloo Classic II and the Primus -- a throne that comes with its very own remote control!

Unreal: Why mess with a winning formula? The original Spaloo was pretty incredible just as it was.

Santhuff: We sold out of our original model, and the new versions are big improvements in terms of features and quality. We've moved production from Taiwan to Korea.

Tells us about the Classic II. Is it named that because each time you go No. 2 on this toilet seat it's a "classic"?
I like that! But, no, I just needed a new name. Since the first one was the "classic" model, this one is the Classic II. I think people are really going to like it.

What's it do differently?

It still has all the great features of the original. It washes your privates with warm water and blow dries them clean. But it's an all-around slicker machine. The hot water lasts a lot longer. It has a power wash that gives you an extra burst - you know, for persistent dingle berries. It has a massage nozzle that moves back and forth and pulses and it has a built-in deodorizer.

Massaging and pulsing? Does anyone ever tell you they use Spaloos for sexual gratification?

It's been implied. Some women really like the female wash feature -- especially women whose privates have been, umm, dormant for awhile. One woman actually asked my wife if the Spaloo would give her an orgasm. Of course, we can't guarantee that. We installed a Spaloo in the women's room at an office, and I know they eventually had to put a time limit on how long female employees could stay in the restroom.

The Primus model comes with a remote control. Are we really that lazy? The Spaloo already does all the dirty work for you, now you don't even have to turn to the side of the toilet and press the "wash" button?

Spaloo has never been about laziness. It's about cleanliness. Water cleans better than paper. The remote just helps people who might have a disability and are incapable of turning their bodies or for people with bad vision. They can bring the remote right up to their nose.

Is that a universal remote? Can it also control the TV and DVD? Perhaps dim the lights, too?

No, but perhaps down the road. They now have toilet seat bidets in Japan that also play music. So who knows? Perhaps the Spaloo Classic III will feature an Ipod plug-in or a built-in radio.

So what are these suckers selling for?

The Classic II is still $399. And the Primus goes for $469. I really think it's the best one for the first-time user. A great starter Spaloo.