Heard this One? A Plumber, An Anti-Feminist, and a Presidential Wannabe Walk Into a St. Louis Hotel Ballroom 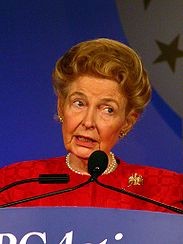 Did you make it to Phyllis Schlafly's conference  "How to Take Back America" this past weekend at the Frontenac Hilton? Or did you commit yourself to doing sane things instead?
If -- like us -- you fall into the latter category, apparently we missed a gay old time. (Gay as in in "amusing and fun" and not as in "homosexual." No. Definitely not that.)
Panels and discussions at the conference -- which drew "Joe the Plumber" and former presidential candidate Mike Huckabee -- included:
Thankfully, some media did attend or catch segments of the conference. St. Louis Public Radio was one of them, quoting Schlafly, founder of the Eagle Forum, who reminded everyone that "czars" are Russian.
"Yes I do think Obama's taking us into socialism," Schlafly told the the public radio station. "Yes I do think Obama's taking us into socialism."What's gone on at the tea parties and the town hall meetings show that the American people are waking up. They don't want to put our children and grandchildren in debt that's a mile high and they don't our country to be run by czars. That was a Russian idea."
Gawker noted that Joe the Plumber a.k.a. Samuel Wurzelbacher was on hand to receive a special gift.

"Wurzelbacher was given a golden wrench and golden plunger by Reps. Price and King, the purpose of which was to throw a wrench in the works and to flush out Washington, according to the Free Press. He lamented the value placed on good speeches by politicians, quoting Benjamin Franklin's comment that "well done is better than well said."

Hucklebee, meanwhile, suggested that the U.N. be jack-hammered from New York.
"It's time to get a jackhammer and to simply chip off that part of New York City," said Huckabee, "and let it float into the East River, never to be seen again! ... "It's time to say enough of the American taxpayer's dollar being spent on something that may have been a noble idea, but has become a disgrace! It has become the international equivalent of ACORN and it's time to say enough!"