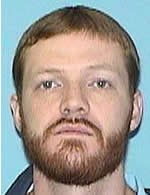 New details are emerging about Michael Finton, the man accused yesterday of attempting to blow up a federal building this week in Springfield, Illinois.
The 29-year-old Finton -- who reportedly works for a chicken and fish restaurant in Decataur, Illinois -- was arrested on Wednesday when he attempted to ignite a van outside the federal courthouse in Springfield. Finton's co-conspirator in the plot was actually an FBI agent who signaled in law enforcement when Finton dialed a cell phone that was supposed to detonate a fake bomb inside the van.
The Springfield State Journal-Register has the most in-depth and compelling account of Finton, who called himself "Talib Islam."
According to the paper, authorities had been observing Dinton for the two years. In 1999 Finton was convicted of aggravated battery in Richland County -- some 160 miles southeast of Springfield. He was released in 2006 and returned to prison in 2007 for a parole violation.
Per the Journal-Register:

At that point, his parole officer found several of Finton's writings, including a letter he had written to John Walker Lindh, an American who was captured fighting for the Taliban in Afghanistan in 2001 and imprisoned on terrorism violations.Over a period of months, Finton allegedly told the acquaintance, who was cooperating with authorities, that he wanted to go overseas and become a jihadist fighter.

In 2008, Finton received $1,375 from a person in Saudi Arabia to visit the country. Finton left in April of that year and stayed a month, telling a police informant that a sheik wanted him to marry his daughter.
Finton also allegedly told a government source that he would rather die as a martyr than live in the United States.
A time line of Finton's arrests and plots follows.

The case against Michael C. Finton aka Talib Islam on Dipity.