September 25, 2009 at 4:57 PM
comment
Have fun, save money. Here are ten things to do this weekend for $10 or less. For those of you looking for live music, consult our weekend concert calendar.

What the hell is going on in Fred Stonehouse's family album? The Wisconsin-based artist's new exhibition, Den of Secrets, explores Stonehouse's fascination with the common tendency of older family members to hoard the truth about close relatives and distant ancestors. Free. Paul Friswold has more info about this art exhibit, which opens Friday.
The Secretaries at Theatre 134 (Opens Friday)

The dark comedy The Secretaries premieres in St. Louis thanks to the Echo Theatre Company (314-225-4329 or www.echotheatrecompany.org), and you can catch this killer of a show at 8 p.m. Thursday through Saturday and at 7 p.m. Sunday (September 25 through October 11). Tickets cost $10 to $20, and The Secretaries is presented at Theatre 134 at the ArtSpace at Crestwood Court (Watson and Sappington roads). Alison Sieloff has more details here.
Carolina Chocolate Drops at Off Broadway (Saturday)

Black folk don't play fiddle tunes, certainly not twentysomething black folk, and they sure as hell don't contra dance. But don't tell that to Justin Robinson, Rhiannon Giddens and Dom Flemons, a.k.a. the Carolina Chocolate Drops. $10 at Off Broadway. Roy Kasten has the rest of details here.

Dancing in the Street at Grand Center (Saturday) 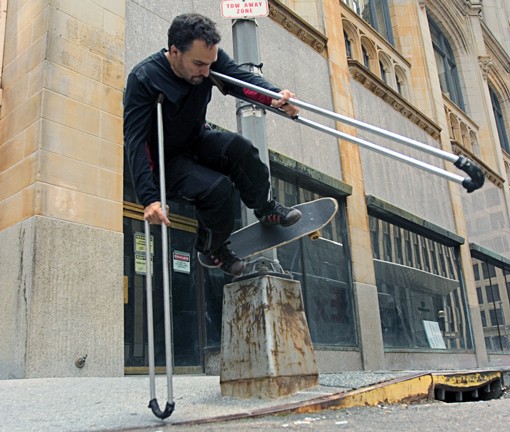 This weekend, Grand Center hosts Dancing in the Street, and as the song goes, "All we need is music, sweet music" -- well, that and 50 dance companies performing on four outdoor stages and all around Grand Center! Alison Sieloff has all the details about this festival.
Chili Fest at Westport Plaza (Saturday)

Admission to the 34th annual National Kidney Foundation's Chili Fest is just $5, and as Ian Froeb writes on Gut Check, "All proceeds benefit the National Kidney Foundation. This isn't some half-baked (or, er, half-simmered) competition, by the way: The Chili Fest is sanctioned by the International Chili Society." More info on Gut Check and on the official website for the cook-off. Go forth, enjoy the chili. Just pick up some of these on the way home.

​The former industrial stretches of Locust and Olive near Saint Louis University have seen several popular restaurants and clubs open in the past few years. To celebrate this pocket of urban revival, on Saturday from 4 p.m. to 10 p.m., Locust Street between Compton and Garrison will become a festival grounds: art, food and five bands (The Hibernauts, Urban Groove Project, Steve Ewing of the Urge, LOGOS and Fundamental Elements) are promised. With the Dancing the Streets festival going on in nearby Grand Center, hungry dancers may want to wander over to the newly named "Midtown Alley," which includes Buffalo Brewing company, The Fountain on Locust, The Good Pie, Pappy's Smokehouse and The U. More info here: www.midtownalley.com.

The Delmar Loop's the Tivoli Theatre is known for its midnight movie series that runs from July through October, and those movies are for the most part, cult classics. This weekend's feature, the 2005 Sci-Fi Western Serenity, cracks the mold because of its fairly recent release date. As a film, it's a good one; critics liked it and so did fans, as it cashed in more than $25 million domestically. It's playing again on the big screen at midnight on Saturday and Sunday (really Friday and Saturday nights) for just $7.

Bruce A. Raisch at Ari's (Saturday)

Some people in this world walk through life flitting from this to that, not fully embracing much -- and then, there are people like Bruce A. Raisch. This local author is so committed to his new book that in the picture he sent with the press materials, he is standing in a coffin. Now, this isn't a book about coffins, mind you, but it is about the haunted hold that ghosts have on some of our nation's inns, so the coffin is pretty relevant and oh-so spooky. To meet this brave soul, who visited something like 40 ghostly abodes, and get a signed copy of his Haunted Hotels of the West, head to Ari's Restaurant & Bar (3101 Hampton Avenue; 314-644-4264) from 2 to 4:30 p.m. There, Raisch will recount his journeys and offer his autograph on the 160-page tome, available for purchase for $26. Free eats will help ensure a festive good time, as will the cash bar. Alison Sieloff has the rest of the details here. 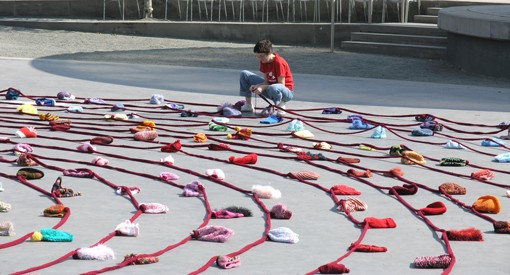 When one person acts alone, a little gets accomplished. But when people work together, the impact is larger, the benefit more widespread. The Red Thread Project, founded by artist Lindsay Obermeyer, is a perfect example of this positive exponential effect. Here's how it works: Kids and adults knit hats of all kinds, for all shapes and sizes, and they drop off these hats at any number of locations, including Knitty Couture (6148 Delmar Boulevard), which is also a good place to take a class if you don't know how to knit. The hats are then gathered at the St. Louis Artists' Guild (2 Oak Knoll Park, Clayton) to be affixed to a single, half-mile-long red thread. Once that's done, folks (such as yourselves) gather at the guild at 1 p.m. on Sunday, September 27, to participate in the Dance of Hats, during which everyone dons one of the donated, now-interconnected hats, highlighting this sense of togetherness and community. Alison Sieloff has more details here.