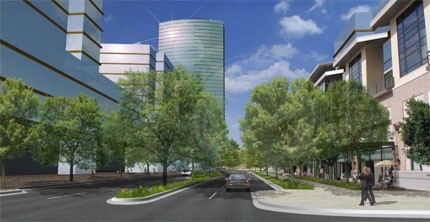 The development, estimated to cost $8.1 billion, could now be eligible for $391 million in TIF monies should the Board of Aldermen approve the plan.

The meeting at City Hall yesterday drew hundreds of spectators -- many of whom hope to land jobs building and/or working in the development.

McKee claims the project will include 10,000 new homes and 4.5 million square feet of retail and business space once it's completed sometime in the 2020s.

Others came out fearing their homes would be taken through eminent domain. A key provision of the TIF, however, is that eminent domain cannot be used without a separate vote by aldermen.

Still under debate is whether the city would chip in to cover half the costs of repaying of the $391 million in TIF bonds if the project can't pay them off itself through tax revenue.