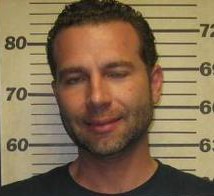 But Acting U.S. Attorney Michael Reap is out of town and requested a postponement.

Ohlsen is now scheduled to be sentenced on Friday, October 2.

Court documents show his attorney, Paul D'Agrosa, and Reap, the prosecutor, are haggling over the amount of time behind bars that Ohlsen's looking at (which is standard). He faces upwards of 2 years in jail.

Ohlsen pleaded guilty to the weapons and bank fraud charges this past spring. He has been in jail since his arrest last December.

Prosecutors used information found during a search of Ohlsen's car and downtown loft to bring charges against Smith and Brown this summer. Ohlsen had done illicit work for Smith's Congressional campaign back in 2004.

Ohlsen is reportedly a person of interest in the Clayton bombing that injured attorney John Gillis last year. D'Agrosa, Ohlsen's attorney, says the government won't charge his client in that case.