September 22, 2009 at 7:45 AM
comment
Check out this sampling of what happened in Missouri over the weekend:

Around 1 a.m. last Friday, a bus loaded with college students was pulling out of the parking lot at Les Bourgeois Vineyards in Rocheport. Brian Lindsey, a 22-year-old Mizzou student in the Pi Kappa Alpha fratnerity, tried to stop the bus. The bus, however, stopped him.

According to the story in the Columbia Daily Tribune, the vehicle somehow backed up onto him, rested on his legs, then rolled off. Lindsey, a Springfield native, was listed in fair condition today at University Hospital in Columbia.

2) Ponzi Schemester in Kirksville Slapped With 30 Months of Prison

What's up with all these Ponzi schemes lately in the Show-Me state? First you had Don Weir of Chesterfield, who bilked over 40 people out of some $10 million. Also this year, you had Cathy Gieseker up in Audrain County fleecing 180 farmers out of more than $27 million.

Then just last Friday, Neal A. Jackson of Kirksville got over two years for cheating 23 investors out of $844,000. The Kirksville Daily Express had that story. 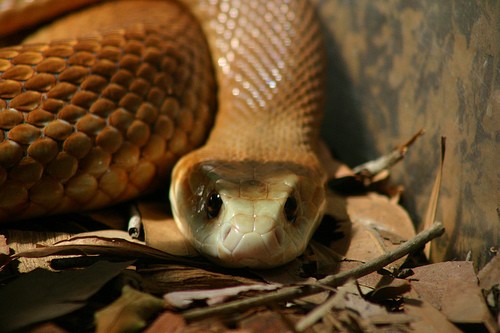 Three adults and one child were taken into custody in Stone County last Thursday when authorities found the following critters on the premises: one alligator, one wolf hybrid, a poisonous cobra and a pair of monkeys.

NOT FINISHED YET!. Here's what else they found (so says the story in Springfield's News Leader):


"In an out building the suspect had about 20 plastic containers of dead snakes and 25 to 30 containers of live snakes, all carefully categorized by snake type...The snakes were dying because of a virus. One snake on the property was six feet long.

"The owner was also storing numerous dead snakes in his kitchen freezer."

Well, would you want them to spoil? Didn't think so. That story's a peculiar one, but not as peculiar as this next highlight....

That's actually a headline that appeared on the News Leader's Web site yesterday. Sounds like they've stumbled into subjective-crazy-tabloid land, huh? Wrong. "Peculiar" is a town in Missouri. Click here to see the map. Click here to read the story (and some amusing comments from readers.)