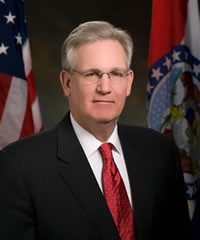 Post-Dispatch political snoop Tony Messenger has an enlightening article out today about Jim Baller and his ties to Missouri.

Never heard of Mr. Baller? Well, apparently he's quite the expert on broadband access and has testified before Congress on the issue.

Now Missouri is trying to win federal stimulus money to expand its broadband Internet coverage to rural parts of the state, and Gov. Jay Nixon thinks its important that we have Baller fighting on our side.

In fact, Nixon's office thinks its so crucial to have Baller that it signed him to a no-bid contract that pays the consultant $450 per hour. The contract has raised the ire of some Republicans in Jefferson City -- especially considering that the spending limit for the contract has recently doubled in price.

Initially, Baller and his Washington D.C. law firm were not to exceed $50,000 in total costs for their work submitting broadband grants on behalf of Missouri. But the law firm blew past that cap after just two months of work, and a new $100,000 cap was placed on the contract.


"Because of the short deadline and the expertise needed to put together these broadband grants, we thought it was necessary to get somebody with their technical expertise," Cardetti said of Baller's law firm.

This is the second time this month that Nixon's office and its grant writers have made headlines. On September 8, Nixon's office hired recently retired Post-Dispatch features editor Christy Bertelson to a $100,000-a-year gig writing grants for federal stimulus money. (A relatively cheap contract compared to the one Baller has.)