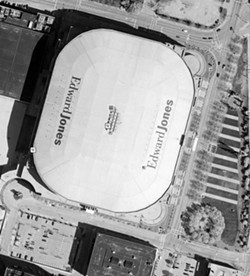 St. Louis -- along with 27 other U.S. cities -- is a finalist to be a host site for the 2018 or 2022 World Cup. Today, John Kristick a key member of the USA's national bid committee is in town to meet with local officials (including Mayor Francis Slay) and decide whether the Edward Jones Dome is a suitable place to play some of the most important soccer matches in the world.
Since it's not even a decent place to play a regular season NFL football game -- it was named the worst stadium in the league by Sports Illustrated in 2007 -- soccer fanatics should probably start planning their trip to Chicago to see the Americans upset Brazil in 2022.
Then again, maybe Kristick, the U.S. "director of bid planning and operations" will be suckered in by the $30 million in renovations to the 66,000-capacity Dome recently paid for by St. Louis taxpayers.
Or maybe the mayor could mention Unreal's idea for upgrading the Dome...
In a stroke of genius, we suggested that renovators use a can opener and pop the top the Dome, thereby allowing sports to be played in the great outdoors like nature intended.
But, since that seems unlikely, here's a refresher on what your $30 million paid for earlier this year (via KTVI, emphasis ours):

"The remaining north end zone scoreboard space will have new ad panels as well as openings to the Rams Club," the release says. "This will provide fans with the ability to watch live game action on the field from the seating area in the Rams Club.

The renovated Rams Club will also feature an enhanced audio-visual experience with more televisions and better viewing angles. The south end zone scoreboards and ad panels will also be replaced with a new LED video board that is twice the size of the current version. It will feature the same state-of-the-art technology as the new north board. The remaining south end zone scoreboard spaces will be opened to a new Premium Club with a view of the field, inside lounge spaces, game areas and other amenities.

The Premium Club will have a private elevator and adjacent parking. Both new clubs on the north and south ends will allow some daylight into the bowl area, and most of the dark blue paint in the bowl will be replaced with a lighter color scheme to brighten the bowl.

The large Highway 70 marquee in front of the building will be replaced with new LED technology."

The Dome is also due for additional work in 2015, when the Rams' lease agreement stipulates the home turf must be on par with "the top 8 facilities in the league." Maybe by that time the team itself will be among the best in the NFL. It's hard to say which is less likely.