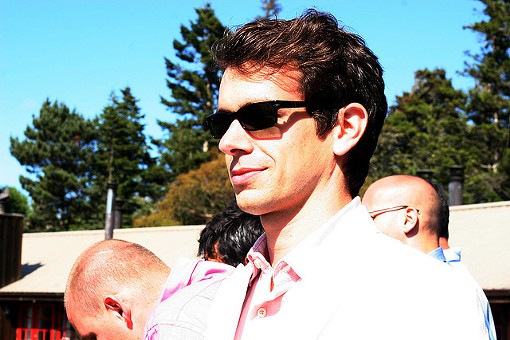 Having assumed the title of "chairman" of Twitter, Jack Dorsey is no longer involved in the day-to-day operations of the social-networking software he co-founded in 2006 -- leaving the 32-year-old free time to ponder his next big project.

This morning at Webster University, Dorsey hinted at one of his plans for the future. It involves pairing with his "old boss" Jim McKelvey of St. Louis-based Mira Digital Publishing to start a new company with "similar ideas" as Twitter, but in a "completely different industry."

Dorsey, a St. Louis native (Bishop DuBourg High School, class of 1995), says the new operation is still in "stealth" mode, and couldn't give a name for it just yet.

What Dorsey could say was that St. Louis would have a prominent role in the new firm.

Dorsey added that the new company would be based on the "three concepts (of Twitter): immediacy, transparency and approachability."

Dorsey took questions from the media before the hour-long discussion with students, teachers and staff at the Webster Groves university. About a dozen family members, including Dorsey's grandmother, sat in the front two rows of the auditorium.

Reports out this week estimate Twitter's worth to be $1 billion, a number that Dorsey couldn't confirm Friday.

While Dorsey is starting this new company, he said he won't be leaving his role at Twitter any time soon.

"It's my life's work. I love it. It's my baby, so I will always be associated with the company and with the technology," he said.

Twitter co-founder Biz Stone has said that the company will expand before the end of the year with more services for commercial users, but Dorsey couldn't be more specific on the roll-out date for a business application.

"I can't confirm the date," he said. "I know the team is working on it very hard to get it out as soon as possible. We're getting a lot of feedback from the companies that are using Twitter today, and that's being built into what will be available to the world."

He also exposed a few secrets of the company. Turn the page to find out the origins of the Fail Whale, the word "tweet," and Twitter's first two names.

The Fail Whale, for example, was an illustration by Stone, meant to only appear on the site for about fifteen minutes while Twitter switched servers. Anyone who works in IT can tell you, those things rarely go as planned. The whale in the logo symbolized Twitter's collective weight of its users and the birds carrying it in the net symbolized the transfer of the servers. Instead of fifteen minutes, the transfer took 36 hours. From there, the company experienced massive technical problems, and an engineer chose, apparently at random, the Fail Whale image. And that's how it became the symbol that Twitter is down.

Twitter was first called "Status," (Dorsey's idea) then "Twitch," as in the buzzing vibration in your pocket when your phone receives a tweet.

Noah Glass, a co-founder of Odeo -- the podcasting company for which Dorsey previously worked -- looked in the dictionary and saw "twitter," below "twitch."

As for the word "tweet," a term everyone who's used the service has made fun of at least once? It was also avoided by the company's employees.

"It's interesting because the word "tweet" was pretty annoying early on to the company," Dorsey said. "We would not use it. We thought it was kind of a ridiculous word. We would use "update." And it took us a long time to appreciate that word and what it meant and it came entirely from the users, and en masse, people just recently started using the word "tweet." And two months ago, the company started using it internally and now you see it on the site. I love the story behind that. A lot of our features, a lot of our technologies have come from that usage."

During Dorsey's speech and question-and-answer session, live tweets with the hashtag #jackatwebster were projected on a large screen behind him.