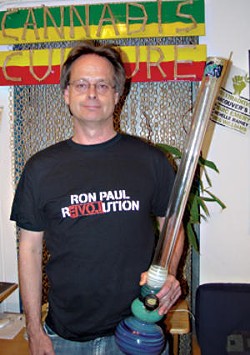 Marc Emery calls himself "The Prince of Pot." Others have dubbed him "The Johnny Appleseed of the Sticky." The Vancouver, British Columbia native has earned both titles.
He is the editor of Cannabis Culture magazine and the founder of the BC-based Marijuana Party (guess what they're in favor of). Former U.S. Attorney John McKay called him "the biggest purveyor of marijuana from Canada into the United States" and the DEA claimed that marijuana seeds he sold via the Internet for 11 years resulted 1.1 million pounds of pot (worth an estimated $11 billion) being grown in this country.
Basically, if you've ever smoked "BC Bud" you have Marc Emery to thank for your catatonic high.
But alas, Emery had to know that operating with a high profile (ahem) would get him busted. He was arrested by Canadian and U.S. authorities in 2005 for his online seed selling business. Later this month, Emery will be sentenced by a jury in Seattle to five years in a Canadian prison. A plea agreement reached in January will allow him to serve his time in his native country and keep his co-defendants from lengthy sentences.
So a Canuck pot dealer/activist goes to jail thanks to a Washington state jury. What's that got to do with St. Louis?
Emery, as this story by RFT's sister paper in Seattle details, contributed thousands to the presidential campaign of pro-pot libertarian Ron Paul (partly, he admitted, in hopes of receiving a presidential pardon should Paul have been elected) and further drew attention to himself when he and his supporters heckled drug czar John Walters at a speech in Vancouver in 2002.
"Emery is just another example of an otherwise law abiding citizen being sent to prison for a non-violent marijuana offense," says St. Louis NORML director Joseph Welch. "Except his case his more political. He's being singled out for his role in the marijuana legalization movement."
Lest Welch's claims be dismissed as devil-weed induced paranoia, consider that the director of the DEA called Emery's arrest in 2005,"a significant blow not only to the marijuana trafficking trade in the U.S. and Canada, but also to the marijuana legalization movement...Drug legalization lobbyists now have one less pot of money to rely on."
Tomorrow, as part of a worldwide series of protests, the St. Louis Chapter of NORML will be demonstrating downtown at the intersection of Tucker and Market Streets tomorrow afternoon at 4 p.m.
A piece of advice to politically-inclined St. Louis potheads: leave the stash at home-- the demonstration will be in front of the Mel Carnahan Criminal Court House.