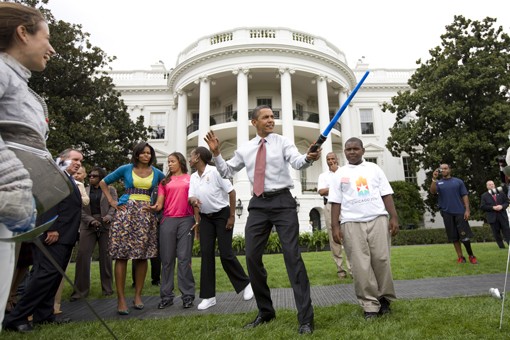 Who's that woman in a white shirt and black pants in this soon-to-be legendary photo of the president Barack Obama? Why it's none other than former Olympic star (and East St. Louis native) Jackie Joyner-Kersee, who dropped by the White House recently for an event to build support for Chicago's bid to host the summer Olympics.

The president's pose in this pic clearly shows his admiration for the greatest film franchise in modern history, and what looks like a decent fencing stance. But the prez has even more admiration for his hometown of Chicago -- which he hopes will land the games in 2016.

Now, the photo above is great and everything, but really it pales in comparison to what "W" did last summer at an actual Olympic competition:

Bush assisting a beach volleyball player get the sand off her backside and looking all "drunk," according to one blog.

Or Bill Clinton, back in Hot-lanta in 1996. Bite that lip, raise that thumb, and, hey, where's his other hand? 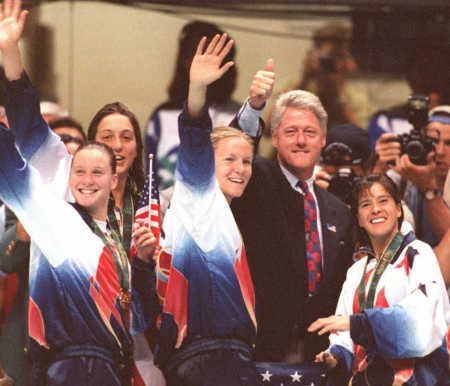 The Olympics have always been a time for presidents to loosen up and goof off a bit. It's just a shame bowling isn't an Olympic sport, maybe Nixon would've had something to cheer about once a while: