By the Boards: Dennis Brown on the STL Theater Scene September 17-20 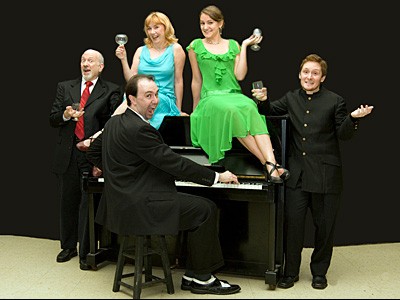 The arrival of Caryl Churchill and Stephen Sondheim makes for an arresting weekend of theater. Each will be represented by one of their most popular works from the 1980s.

Top Girls, Churchill's play about sexual politics, will be staged by Slightly Askew Theatre Ensemble. Although the script was first staged at London's Royal Court Theatre nearly 30 years ago, in 1982, for first-time viewers it will doubtless seem fresh, immediate and somewhat confusing. And why wouldn't it, when the characters in this all-female drama include historical characters from the past, characters from fiction, even the subject of a Brueghel painting? All bets are off when you attend a Churchill play. The wisest thing to do is to simply let the piece roll over you and hope that your antennae are open to a new kind of theater experience (or "theatrical endeavor," as she once described her writing). You might be pleasantly surprised by how much of the piece you "get."

Whenever I hear that someone is going to stage Into the Woods, I wonder how the actors will move. The original 1987 Broadway staging of this Stephen Sondheim-James Lapine riff on classic fairy tales was especially charming, thanks in large part to Lar Lubovitch. The celebrated choreographer had helmed a dance company in New York City for decades but had never worked in the Broadway theater until he was asked to join Into the Woods -- not to choreograph it but to give it a sense of flow. That's precisely what the Broadway version had that no other staging, likeable though they all are, has quite matched: It flowed. No one walked if they could skip; no one skipped if they could glide. It was as if the entire evening was staged on a moving carpet.

Four years ago, when he came to town to attend a student production of Into the Woods at Washington University, Lapine told Riverfront Times that he had never seen a production of the musical that he didn't like. And he'd seen some doozies, including a staging in Germany that turned Little Red Riding Hood into a slut, complete with spiked heels and miniskirt. That's how I feel: There's so much going on, if you see Into the Woods during its current three-week run at Stray Dog Theatre, you're bound to leave having liked something about it.

Finally, here's something else to like: If you're looking for a good deal this weekend, consider TomFoolery, the West End Players Guild's production of the 1980 London revue based on musical parodies of 1950s iconoclast Tom Lehrer. The production opens officially on September 25 at Union Avenue Christian Church. But WEPG is offering a free preview at 7 p.m. Friday, September 18 at Third Degree Glass Factory, 5200 Delmar Boulevard. The price is surely right, and the best of Lehrer's material is priceless.