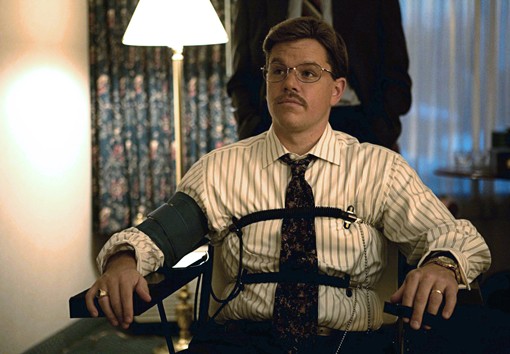 The latest movie by Matt Damon (anyone else automatically think of this video when they hear that name?), The Informant! has a scene in St. Louis, specifically where Damon, who plays an Archer Daniels Midland executive-turned-whistle-blower, visits the Anheuser-Busch brewery. Thanks to this local blogger, we have photographic evidence of Damon's visit back in May 2008: 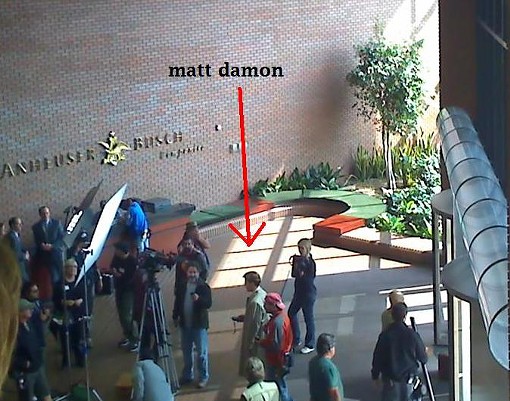 
Yep, so Matt Damon was here shooting a few scenes for his new movie The Informant. All I could really think of most of the time he was here was the famous "I'm fucking Matt Damon" song. I couldn't help but whistle it as I walked along the upper walkway right above where they were shooting the film. What was really funny was the fact that this is suppoed to be a winter scene so the props guys were out there with a snow machine trying to make snow, what they got were melted compact puddles of ice around the dead tree props. I dunno, maybe it's supposed to look that way, needless to say the blooming flowers and bright green trees in the background might give away the actual time of year.

Meanwhile, George Clooney's latest film, Up in the Air, which featured several scenes from St. Louis, is opening to positive reviews at the Toronto International Film Festival.

Now all St. Louis needs is Missouri native Brad Pitt to come to town, and the city could make a compelling case for the duo to plunder the riches of one of our casinos for an Oceans 14 flick. Maybe that new one they've got planned in north St. Louis County?